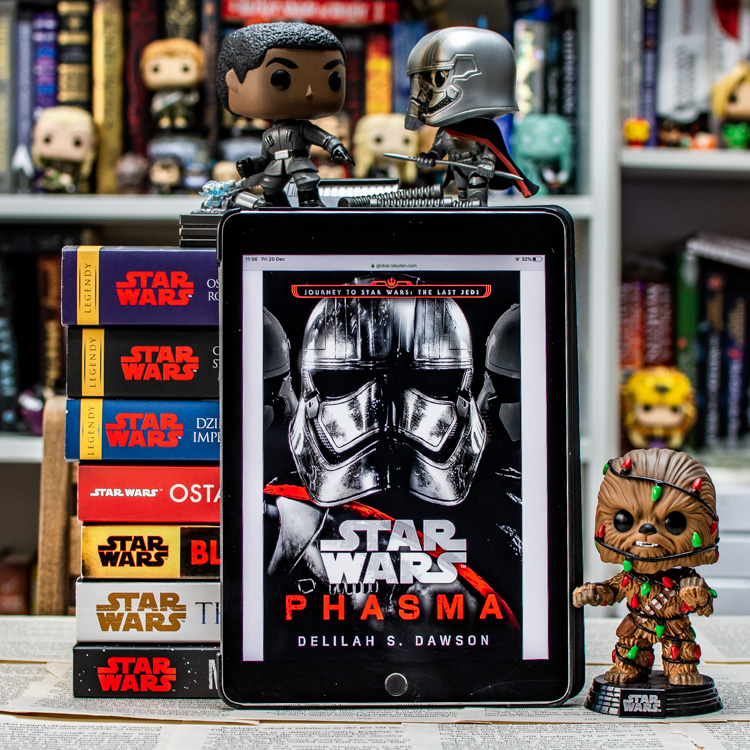 I read “Phasma” by Delilah S. Dawson because with all the hype for the new Star Wars movie I felt a great longing to get back to the universe before going to the cinema. So, as I had this book in my collection for a while now, I decided it is high time to read it.

Phasma is one of the officers in the First Order. She’s not playing a significant role in the movies, but she’s there, and with her imposing posture and chrome armour she’s quite an intriguing character. So, when I saw the book about her, I got excited about it.

The book is not narrated from Phasma perspective, unfortunately. We meet Vi Morandi, a spay from Resistance, who gather information about First Order officers, including Phasma. We learn her story said from the perspective of one of her companions back on Paranassos where she comes from.

Her home planet was a nuclear-ravaged piece of rock, hardly a place to live. Still, Scyre clan was fighting for survival there, and Phasma was their most fierce warrior. Their challenging life became even more demanding when the starship had crashed on the Parnassos surface, putting an end to the very fragile peace between clans. General Brendol Hux from First Order offers a place in the military to everyone, who helps him get back to his ship. Phasma took upon herself to see this dangerous mission to its end.

While story unravels, we see the change in perceiving Phasma by her companions. She was a well-respected clan leader, and her people would follow her into hell if she ordered it. But with new opportunities and allies at hand, it becomes clear that her allegiance is for those who have more power. It was sometimes sad to read when the protagonist was getting more and more indifferent for the suffering of her own people.

I think the author portrayed her quite accurately as an opportunist who is ready to do anything to survive and gain more power. My only regret is that we don’t see her point of view. There was only one short chapter written from her perspective. I think it would be fascinating to see her reasoning and if there was ever any conflict inside her at all.

The book served its purpose. It made me want to watch a whole new Star Wars movie again, just to take a closer look at her character. If you are fans of this universe, I’m sure you will enjoy this book.