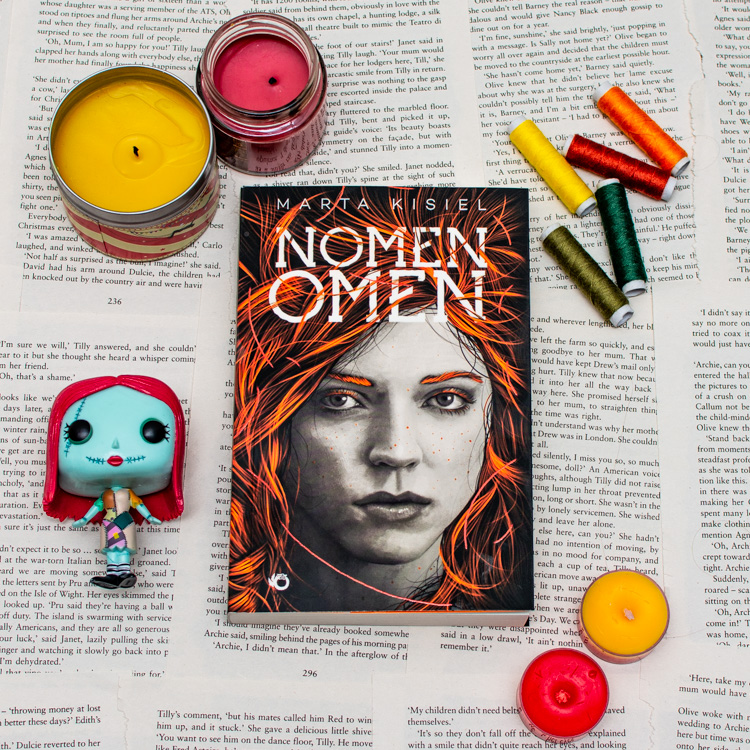 Nomen Omen is another novel written by Polish author Marta Kisiel. The story is based in a city of Wrocław where our main character, Salomea, has runaway to from her crazy, controlling family. Unfortunately she doesn’t have much luck there either. She rents a room in a house with such bad reputation, that even taxi drivers don’t go anywhere near it. Her host is a very weird old lady, no radio is working in this place and on the phone you can here strange voices. To make things even worse, her younger brother is kicked out from his dormitory and come to her for help. You would thought it couldn’t get any worse, but of course it does. Everything gets very complicated when Niedaś, protagonist’s brother, push her off the bridge to the river.

As I wrote already on other reviews for Marta Kisiel’s books, I really love her sense of humour. Our protagonist is extremely clumsy person, always walking into things and tripping. Maybe it was little too caricatural to be real, but it didn’t bother me. Her brother, Niedaś, is typical lazy student who can’t take any responsibility for what he does and is very used to his sister always taking a blame for him. Although he is very talented in using street slang and in playing MMORPGs. I was wondering if the author herself was playing World of Warcraft or if she did such a thorough research. Because I was playing this game for a while and all the scenes where Niedaś and his over 80 years old host are going on raids or battlegrounds are so accurate and so funny. But my absolute favourite was the parrot who attacked a dog shrieking ‘for the horde’! I was horde myself, so I share the sentiment ;)

As in author’s other books we have here a modern world with small elements of magic and myths appearing from time to time. In her seemingly normal life Salka is facing more and more weird events that don’t have any rational or logical explanation. But to find out what is happening around her she needs to uncover a family secret hidden for so many years by her grandmother.

I really liked the way the author showed us times of WWII and what happened afterwards. That for normal people doesn’t matter if their neighbours were German, Polish or Jewish. They were people and their friends, so when new government started to force people to leave their homes and move to Germany it was a terrible injustice against them. The same goes with destroying old German cemeteries.

Nomen Omen is very wisely written book with a lot of humour and a little bit of magic. If you’ve read other books from this author, I’m sure you’ll love this one too. If not, it’s a good place to start.