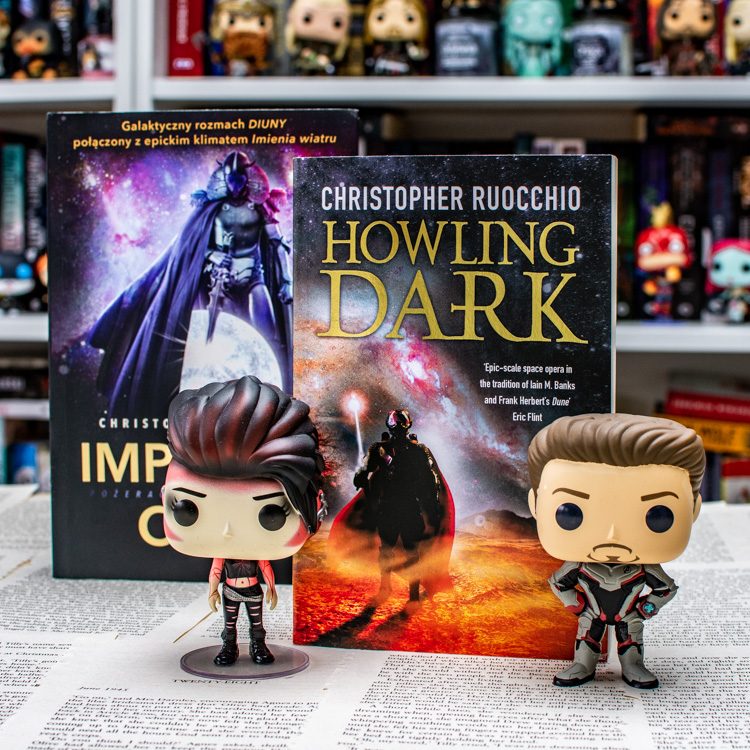 “Howling Dark” is a second book in “Sun Eater” series by Christopher Ruocchio. Hadrian’s epic adventures continue, and this time he is taking us to the very borders of the known universe, to the dark space inhabited by creatures feared by all Sollan Empire.

Hadrian is doing everything to fulfil his mission and dream of finding a mysterious planet Vorgossos and contact the elusive race of Cielcin. But even if he finds it, will he be able to stop the war that was menacing the human for hundreds of years now? Can the aliens be reason with, or they are just the monsters who can bring the only destruction? Is peace in the galaxy only a fantasy?

The book is starting strong with an action-filled sequence. There’s fighting for life against all the odds in a totally unfamiliar environment. Unfortunately, after the few first chapters, everything is slowing down. Most of this tome is basically sitting around and waiting for things to happen. There is a lot of philosophical contemplation of humankind and its future. To be honest, as much as I love the first book, I really struggled with that one.

The world itself is amazing though, the species, technologies, ancient civilisations lurking in the dark – I do love all that. And the questions about human nature author is asking are also very accurate and on point. But I get a feeling that there is just too much contemplation and not enough story. I read this book for a long time and finish it only because I really like the first one and was hoping it will get better at some point. And it does, at the very end.

The language the author is using is vibrant and sophisticated. Some sentences are masterpieces by itself. I was often checking some words that I haven’t seen before. It is a pleasure to read but again, only to some extent. Sometimes I was wondering if the form itself is not more interesting then story the book tries to tell us.

I don’t think the book is bad. It has impressive qualities – the world itself, the language, ideas. But it is slowly unfolding and has plenty of philosophical monologues. It is not a quick read, and you need time to enjoy it. But if you read the first book and enjoy it, you know what to expect and can continue with Hadrian’s adventures.