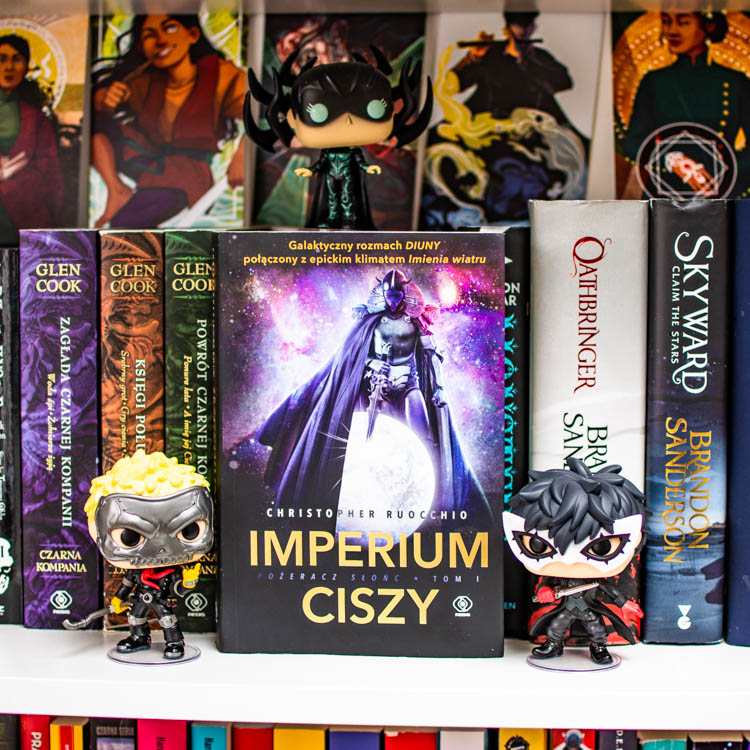 ‘Empire of Silence’ by Christopher Ruocchio is the first book in new ‘Sun Eater’ sci-fi series. It was advertised as complex as ‘Dune’ and atmospheric as ‘The Shadow of the Wind’. I usually don’t like comparisons to other books on covers, but in this case, it was surprisingly accurate.

In the beginning, we met Hadrian Marlowe, who earned the reputation of a hero and a monster. Currently, he spends his days imprisoned and writing down his memories, since the very start, when he was just a young man, son of influential archon of prosperous planet Delos. Don’t expect any fireworks, great wars and aliens’ annihilation from the first book. We won’t even know how the character gained his reputation after this book. This is just the beginning of the story, and the author takes his time to describe Hadrian’s whole life. But don’t fret, there will be no time for boredom either!

I absolutely love the author’s writing style. ‘Empire of Silence’ is beautifully written, and there are loads of very accurate quotes about humankind and the world. The focus of the story is Hadrian Marlowe himself. We accompany him from early adulthood when trying to escape his forced fate, he caught up in many dire situations. It’s not a cheery and sweet story. Our character must endure a lot of hardship, and all his carefully prepared plans collapse one by one.

When it comes to world-building, I’m very impressed. I love complex realms, and here the author delivered perfectly! Humankind developed the technology that enables them to race across the stars and conquer the galaxy, creating the Solar Empire. We have here lots of planets, most of them are described in some way or another (there is an appendix at the end of the book with all the knowledge about the world!), different aliens races, people, who are born from tubes with full range of perfect genes, and also mechanical implants (but those are treated as heresy!). For all sci-fi fans, it would be like Christmas!

‘Empire of Silence’ is a huge volume (about 630 pages). It’s a kind of book you read for a long time, but when you finished, you wished you could read more. Hadrian is an authentic character. As a person living a privileged life, he has no idea about the living conditions of lower classes. It’s when he ends up in the streets, he realised how the real-world works. Marlowe is very cocky, but after a few unpleasant situations, he gets humbler. He learns from his mistakes and even in most dire settings, he always looks for solutions and strives to achieve his dreams.

‘Sun Eater’ is a series every sci-fan fan should read. After the first book, I’m mesmerised, and I can’t wait to learn more about the story.