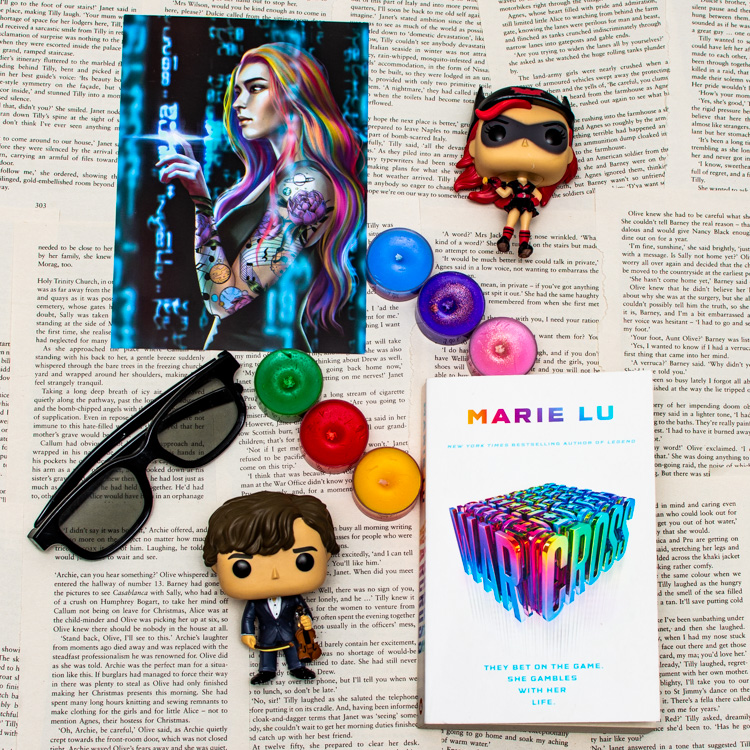 Emika Chen is a bounty hunter, but she is struggling to make ends meet, because she’s deep in debt and unable to get a legitimate job, thanks to her criminal record. She’s so desperate, that she tries to hack into big championship game of Warcross, the most popular game in the world. And in that moment everyone who’s watching sees her glitching into the game. She’s convinced that she’ll get arrested at any moment, but instead she got a call from a famous creator of the game with a proposal she can’t refuse. She becomes a spy trying to find out who is trying to sabotage the game loved by all people.

I really like the book description because it sounds like something really appealing to me. From the beginning we get very similar vibes as in Ready Player One (which I really enjoyed). We have an underdog girl, who suddenly becomes famous and is participating in the biggest virtual reality game in the world. There is also an eccentric billionaire who created it, an icon himself, that she’s looking up to. But then similarities ends. Instead of searching for some big treasure, Emika is participating in Warcross championship just so she can have better access to all players and can find out who and why is trying to hack the game. And with the book progress, the pursue becomes more and more dangerous.

I love the world created by Marie Lu. The big virtual reality game, the glasses or then lenses, that enable you to dive into it head first. The possibilities of storing your memories or sharing them with everyone, so they can experience same things as you. Automated cars and flying skateboards… What’s not to love? The game itself is also interesting, even though it’s nothing new really. It’s kind of crossover from League of Legends, Overwatch and similar games with capture the flag mode. Each player has designated role and they fighting each other in different environments, where they often have to use their surrounding to their advantage. It’s sounds like something I would certainly watch (not exactly play, cause I’m crappy at this kind of quick reaction games ;)).

I liked Emika, she’s smart, resourceful and rebellious. She has a good heart and she stands for what is right even if it may hurt her. I also really liked Hideo character. An eccentric genius very reserved at the beginning, but when given time, he opens up and let out this boy excited by new inventions and really caring for his family. But he also keeps a lot of secrets, what makes him very intriguing.

When I was close to the end of the book I was thinking: it’s solid four stars. There was one thing I guessed correctly when I was about halfway through the book, but I think it was made pretty clear by the author on purpose. Because then we get the ending that I didn’t see coming at all. Instead of predictable closure we get a twist that makes us think and consider some very serious moral dilemmas. I love what Marie Lu did with this story and direction where it’s going. Immediately after finishing Warcross I ordered next book, Wildcard, because simply, I need to know what happens next.

If you are a gaming nerd, or you like the books like Ready Player One you will like this book for sure. It’s full of action, has great virtual reality world and some fun gaming references. It was the first book written by Marie Lu that I’ve read, but I’m pretty sure I’ll check out her other creations, whenever I have an opportunity to do so.