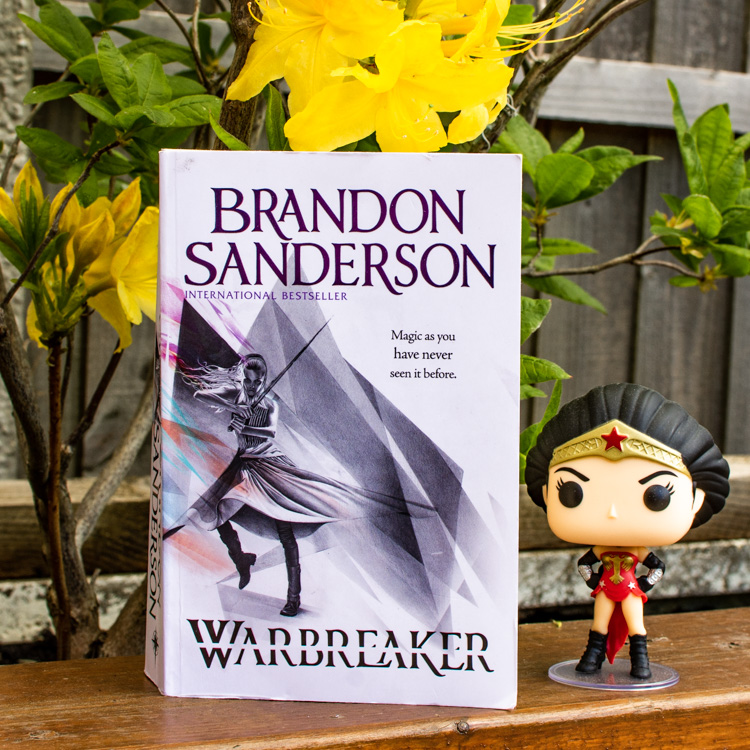 ‘Warbreaker’ was the first Sanderson’s book I’ve ever read. It would never pick it up myself, the old polish edition was so ugly, I would never look twice at it in a bookstore. But I got it as a gift, so I gave it a shot. And I was mesmerised and promised myself to read more of his book. Now I’ve read almost all of them, and I’m waiting impatiently for new releases. After all these years, I decided to reread ‘Warbreaker’ to see how my perception of the book changed after all this time. And yes, I did buy myself a new, lovely UK edition.

It was like meeting an old friend. What I love about Sanderson’s books is that he has such a wonderful style that it gets you right from the start. Probably it is my subjective point of view, but I just love all his books. Also, in ‘Warbreaker’ we have a unique magic system based on Chromatic Breath. People called Awakeners can use their breath and colours to animate objects to do their biddings. Not only that, but it is also possible to reanimate corpses this way, to create an undead army for their command. And that’s how reality looks in Hallandren. Plus, there is also a thing with people returning after dying as Gods.

I really liked the characters. We have two princesses who are forced to switch places. Vivienna, the perfect one, who was raised to become a wife of God King and save her nation and Siri, the careless and useless youngest daughter. They are forced out of their elements and need to face challenges head-on or be consumed by the lavish and dangerous society of Hallandren. Throughout a book, they change so dramatically that you can hardly recognise them as the same person.

There are also very strong side characters. Witty and funny Lightsong, a god who doesn’t believe he should be a god. Vasher, a mysterious and dangerous lone wolf who seems to meddle in all the troubles. Denth and Tonk Fah – two mercenaries whose comments always made me laugh. But under the coat of humour and light conversation, there are still hidden truths that everyone is wondering about.

The whole book is full of twists and deceptions. What seems to be truth taken for granted can change completely every time you read a new chapter. We learn the story points of views of different characters. Siri is head deep in place politics and intrigues, while Vivienna is running around the city trying to do everything to save her sister and her country.

Even though I was reading this book for the second time, it was already a few years, and I haven’t remembered many details of the story. Plus, as now I read most of the Cosmere novels I could enjoy finding elements that also appear in other Sanderson’s stories.

I know it is more of the praise then a review, but I really can’t help it when it comes to Brandon Sanderson. I love all his work, and I can sincerely recommend it to all fantasy fans and enthusiasts out there. If you like original and complex world-building – you can’t go wrong with Sanderson, pick any of his books and I can guarantee you won’t regret it!