To Chart The Clouds 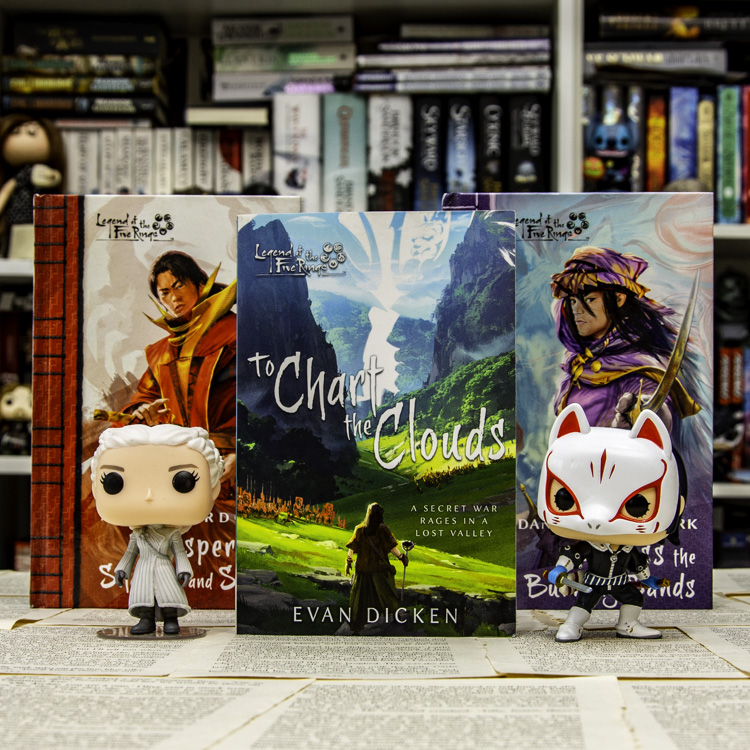 To Chart the Clouds by Evan Dicken is a novel from the Legend of the Five Rings world. The main character is Miya Isami, a young cartography clerk. I was immediately intrigued by that theme because I find cartography fascinating, and it’s not often we can see it as a profession described at length in novels. The author studied the development of cartography in non-western societies (specifically Japan), and his vast knowledge of the topic shows in the story right from the first pages. It was so different from, for example, Shadow and Bone, where the protagonist’s (Alina) job was a cartographer, but we don’t see her do anything that would show how she does that job. Isami, on the other hand, takes us right into the depths of cartography technicalities from the first chapter, and we can tell right away she lives and breathes that job. Kudos to the author because I adored this aspect of the story.

I also liked Isami immediately because she has all the traits I love in characters - she’s confident, passionate about her job, resourceful, brave, and not afraid to stand for what she believes is right.

Miya Isami is a brilliant cartographer who not only honours the tradition of her art but also wants to improve it. Unfortunately, her superiors in Imperial Cartography Bureau are very fond of their traditions. They are outraged by her boldness which results in her failing her exam to become an official Imperial Cartographer. That makes Isami a shamed outcast among her peers, making her life unbearable. Luckily for her, her wild speculations catch the attention of the Imperial Treasurer, who dispatches her on a mission that can restore her reputation and get her the dream title. All she needs to do is mediate between two clans squabbling over land ownership.

Or so she thought.

The story is full of court intrigues, wild twists and turns, and wonderful characters. I tried to predict what would happen next, and I failed every time, which was a great surprise. What I also like is how authentic the characters are. Due to unavoidable circumstances, Isami must team up with two scholars from the antagonistic clans of Lion and Scorpion. None of them is what you would call a good man─they are a perfect representation of their families, with their own agenda and aspirations. And even so, they need to rise above their differences if they want to succeed. Or survive.

If you are familiar with the universe, it’s must-read. If not, you can still read it as it’s a fantasy inspired by feudal Japan with influences from other East Asian cultures. It was one of my favourite books from the Legend of the Five Rings universe, and it kept me on edge almost the whole time.