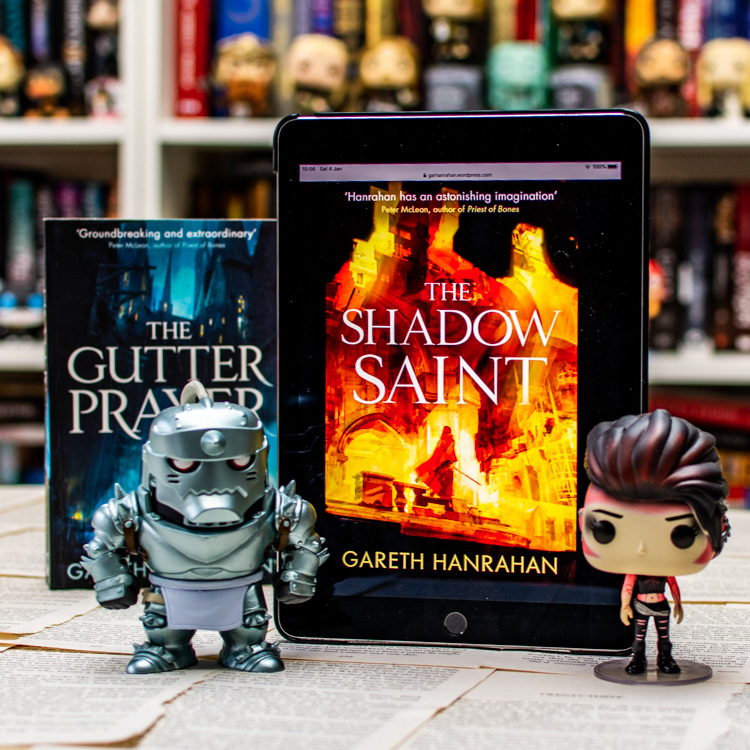 “The Shadow Saint” is the continuation of “The Black Gods Legacy” series. I really enjoyed the first book, so I was very excited to dig into the sequel. Thank you NetGalley and Orbit for the review copy!

The action is picking up a few months after perilous events of “the Gutter Prayer”, called now the Crisis. There is a new city that grows out of nowhere, and no one seems to know what to do with it or how to treat it. Eladora Duttin is working as an aide to Efro Kelkin, and her main task is surveying this unexpected new construct. But while Guerdon is trying to bring back peace and order to its streets, the other factions are plotting how to topple its neutrality in the never-ending God’s War. Because deep beneath the city, there are hidden alchemist secrets, which can change the conflict forever.

I think it is the author style, that the book is starting with an intriguing prologue, then a slow start to get the snowballing effect getting more action and tension towards the end. I must admit I was sort of forcing my way through the first hundred pages. There is only Eladora kept as the main character from the last book, while the two other main protagonists, Ishmere spy and Haith nobleman are new. You will need a bit of time to get used to the original setting and finding out how the newcomers are connected to the main plot. The Gutter Prayer was one of these books I can recall easily, because of its original world and unusual ideas. That’s why I trusted the author will deliver this time too. And I was right.

There is a lot of politics in this book. And I mean, A LOT. Kelkin is trying to seize power over Guerdon, but the opposing party and church of Kept Gods are not making it easy for him. And while the city is struggling with its own crisis, the Gods’ War is coming. I wanted to see more about the conflict, and in this book, we have just that. We have a little bit of insight into Ishmere side, where the mad Gods are trying to conquer the rest of the world. I love how the author created the concept of saints. It’s not just power and might for them. Their mortal bodies are not made for divinity, and so the more God’s interventions they got, the more miracles they perform, the more broken and insane they become. And the Gods don’t care, they use mortals, and when they’re no longer useful, they discard them and choose another one.

We do get a glimpse of characters from “The Gutter Prayer”, Cari, Rat and Spar, but they are on the sidelines this time. Eladora made an enormous leap from the last book. She no longer is a terrified student, but one of the most influential players in Guerdon political scene. And she’s getting more and more confident. We also meet Terevant, the second son of Erevesic house, who has always lived in a shadow of his perfect brother. He also gets quite of a journey throughout a book, from being willingly manipulated by everyone to taking responsibility for his own actions and standing up to what he believes. There is also a very intriguing character of Ishmere’s spy. He is literally living his covers, becoming someone else every time he needs it. And even though he is hired by most dangerous faction, he still fulfilling his own, dark agenda.

Overall, I wasn’t sure how many stars should I give this book. I did struggle a bit at the beginning, and I’m pretty sure some people will find it hard to read. But the world-building itself is what I love, and the author is doing that brilliantly. That’s why I’m giving it 4 stars with a clear conscience. The ideas of mad Gods, their keepers, soul-eating ghouls and god’s bombs still amaze me, and I want to read more of it!