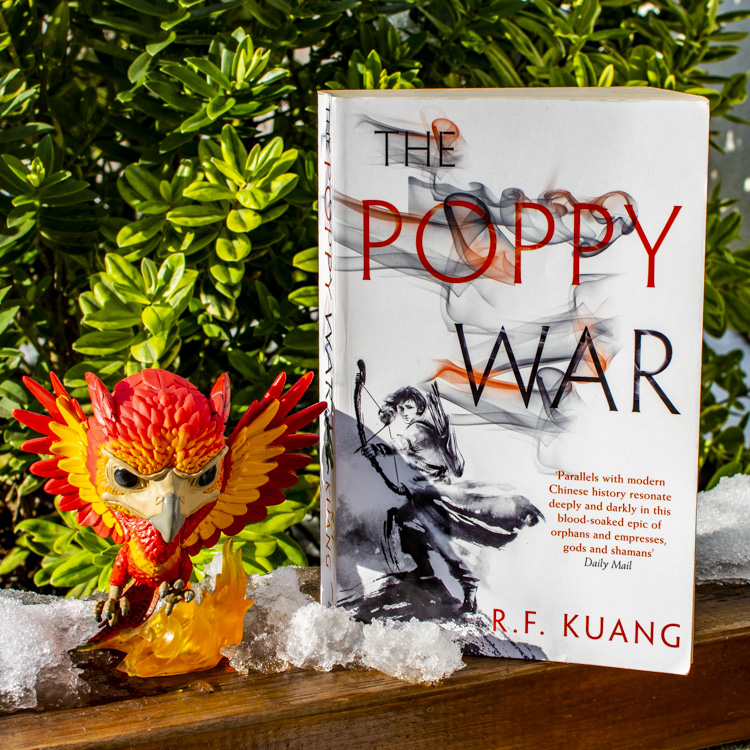 “The Poppy War” by R. F. Kuang is a fantasy novel based on modern China history. Rin is a war orphan raised by the smugglers in poor Rooster province in the south, rural part of the Empire. To escape the arranged marriage, she put everything in preparing herself for the Keju – the exam that allows all those who pass attend the Academies. Thanks to her dedication and strong will, she is given a life-changing opportunity.

“The Poppy War” is a long and complex story. It’s starting with a well-known trope. A poor orphan girl is attending an elite school, where she needs to face countless adversities to survive and prove her value. There’s nothing new here, except the oriental setting, which I immensely enjoyed. We learn more about martial arts and how the Empire was training their best soldiers. We also hear about shamans, but they are treated more like folk tales. There were few interesting characters here, like Jiang, Master of Lore, who everyone thinks is nuts. I also really like Kitay, Rin’s faithful friend.

But after not very surprising part of a military school, the story is changing completely. With the upcoming war, Rin quickly realises that even this elite academy could not prepare her for the brutal reality of warfare. The author is describing it in great details, showing how cruel and inhumane soldiers could be. When I was reading certain scenes, my peace-loving brain was protesting, that R. F. Kuang might get her descriptions a bit too exaggerated, that she was painting the Federation as unfeeling monsters. But then, when I thought about certain events from history, I corrected myself. After finishing the book, I read more on the Second Sino-Japanese War and learnt where the author got her inspiration from exactly. And the reality was even direr than fiction.

Rin is not the most likeable character. She is determined and strong-willed, but also very impulsive, hot-headed, and unforgiving. Despite Jiang’s teachings, she tried relentlessly to use her connection to gods to make herself more powerful, to defeat her enemies, and get vengeance on those who wronged her in the past. Also, I wouldn’t say I liked much Nezha and how he was changing throughout a book. I understand the source of the change, but it felt kind of flat and unexplained for me.

I did enjoy the Cike regiment – the typical bunch of misfits under the command of Altan. It was fun to discover all their weird powers and how they all lived on the edge of the sanity while working as special ops for the Empress.

The ending is leaving the story at a crossroads. Rin will have to face the consequences of her choices sooner rather than later and decide how to proceed with the revelations she discovered recently. I ordered the next book right after I finished this one because I’m sure I want to know how the story goes and how it ends.