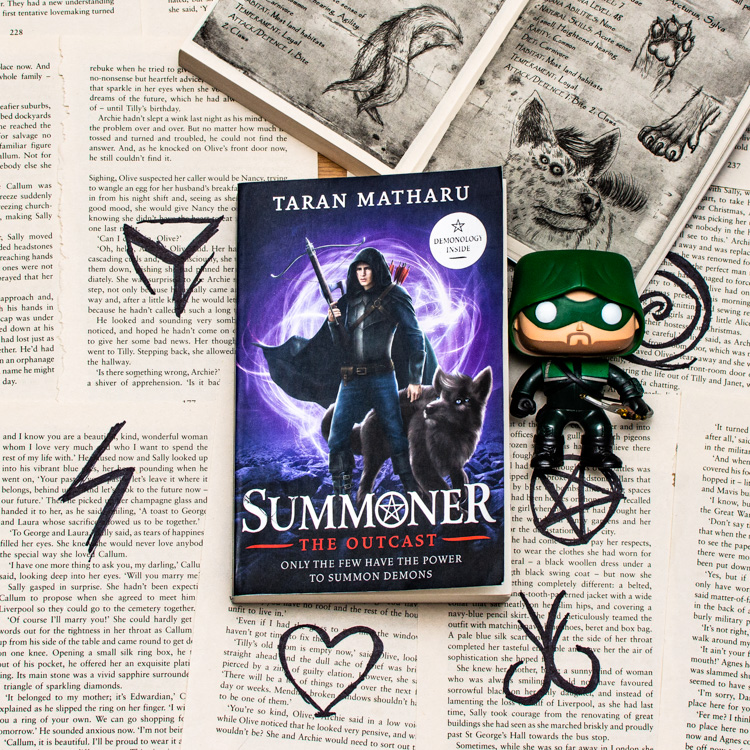 The Outcast written by Taran Matharu is a prequel to the very popular series Summoner. I haven’t read the main story yet, but because I like to read stories with chronological order, I decided that I want to read the Outcast first.

Arcturus is an orphan who is fighting for survival. But he has a grand plan. He collected enough money to run away from his slave-like job in the inn and maybe try his luck somewhere else now. But everything changes when he unintentionally steals a magic scroll from a noble boy, and it turns out he has the power to summon demons. Until now, only children with noble blood has that ability, the commoner using magic was unheard of. To his surprise, Arcturus is not sentenced to death but sent to Vocans Academy, a school for those few who can wield magic. But he quickly finds out that he won’t have many friends there, among noble’s children.

The book is very easy to read. The story is interesting, and Arcturus is a likeable character. A boy who finds himself in an unusual and dangerous situation. Not all nobles are happy with the king’s choice to let the commoner study magic among high born summoners. And they are not limit themselves to mockery or insults. Fortunately, not all students are spoiled brats, and some of them are good persons. It takes a while, but to his surprise, Arcturus finds out he can call some of them friends.

The Outcast is full of adventures. I thought most of the story would take place in Vocans, but we are brought very quickly out of the Academy to other towns and even to a wild jungle full of Orcs and other dangerous creatures. Some of those encounters seem to be a bit random and not entirely believable, but I can’t say it really bothered me.

I loved the idea of summoning a loyal demon to your side and that there is a great variety of their kinds. If you want your demon to be more powerful, you must train them and let it gain some experience. Or you can try to catch one of the more powerful demons. Yes, it sounds a lot like Pokemon! But instead of little fluffy creatures here we have fearsome beasts.

Some explanations of how magic is working were a bit too much like taken right from video games, like the summoner and demon levels or mana reserves. But I’m a gaming nerd, so that hasn’t really bothered me either, it was just a bit odd. I think the author in his series just merged all the awesome things he loves. And that’s why those books are so popular, I guess.

To sum up, I really enjoyed reading The Outcast. I liked the ending, that author found a way to made it epic, but still not too sweet and perfect. I’ll read the next book soon, for sure, considering I already have it on my shelf, with an autograph. I’ve met Taran Matharu recently on a bookish event, and he is a very kind and funny man.

If you haven’t picked up Summoner series yet, you should do it. If you like action-packed fantasy with magic, demons and great conflict you’ll find surely love it!