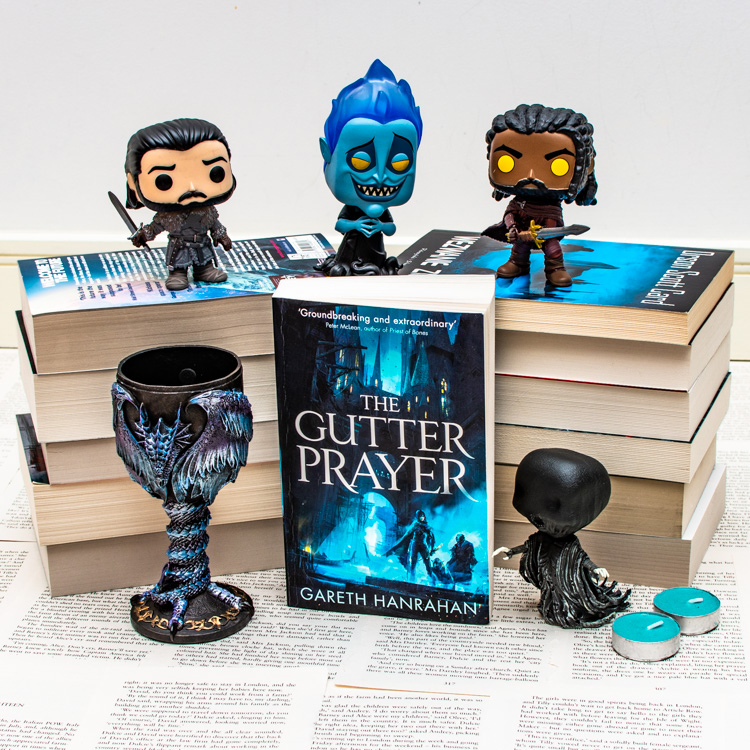 The Gutter Prayer is a debut novel by Gareth Ryder-Hanrahan. It is a dark fantasy story based in a city of Guerdon. In the world torn apart by Godswar, where gods and their chosen saints are destructing and killing all on their way, Guerdon is a neutral, peaceful oasis. But not get deceived that it is safe. It’s full of strange creatures lurking in the dark, as well as monsters walking on the streets as bodyguards. And if you’re not careful and you break the law you may as well be turned to one of them.

The story begins with a heist made by three young thieves. The job ends very badly and they find themselves implicated in a crime much greater then what they were planning. Carillion is a young woman who recently came back to Guerdon and tries to survive long enough to get enough money to get a save passage away from the city. But unexpectedly she’s starting to have very strange visions of events happening in different parts of the city.

Spar is a Stone Man, he has an affliction that slowly turns his body into stone. There is no cure, although there are some medicines that can slow its progress. but they are very expensive of course. He has to live in the shadow of his father who was the head of thieves guild. When he was taken by the city guard and did not spill any of the guild’s secrets, he became a legend. But someone else took over the guild and Spar was reduced to the role of street bully.

The last of main characters is Rat the ghoul. He lives in the surface and tries to blend in with normal people. He is very afraid of his own monstrous nature and the fact that in time he will become a fierce beast using only instincts and urges to finally, when he devour enough souls, become a mystic creature full of sorcery. But for now he is fast, strong and is a great addition for the thieves guild. He even managed to have real surface friends - Cari and Spar.

The book is very original and full of wonderful creations. The author is not afraid to give us a world full of terrifying creatures, but they all seems to have their place and role in the world. I really liked the world building, I’m also very curious about what lies behind Guerdons boarders, I hope we’ll see more of that in the next book. As with all new fantasy worlds this one also needs a little time to get into its strange features. But when you do get into it, it’s amazingly rich and diverse. I only wish there could be some maps added to the book, because I’d love to see how the protagonists ventured across the city.

The whole story is happening only over about two weeks time, but there is loads of action there. Sometimes it’s a bit confusing. We’ve got a changing narrations between our three protagonists, and also two other characters. Sometimes I wasn’t sure about the timeline of events, as we had action from perspective of one person and then we had a chapter from someone else, but it could be happening a little bit earlier. Although it was not bothering me that much.

I really like how the author is creating his characters. We don’t only have good protagonists, there are also several side characters who are really great and very memorable, like the thief-taker or saint Aleena. In general the story is very dark, but there are some parts full of black humour, which made me smile quite often.

This is a great debut book. I haven’t seen it much in social media and I think it definitely deserves more attention. If you’re into epic fantasy tales, and you don’t mind very dark scenery full of terrifying creatures I’m sure you’ll love this book. If you only have a chance to read it, grab it without hesitation.