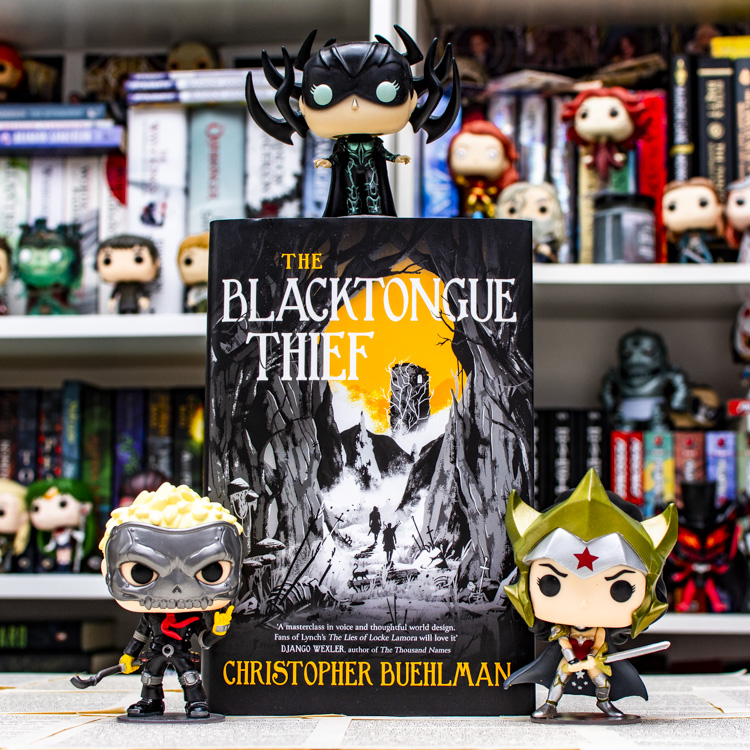 “The Blacktongue Thief” by Christopher Buehlman is the author’s debut in the fantasy genre (most published books were horrors). I absolutely adore the cover, so I was thrilled when Gollancz asked me if I would be interested in Blog Tour with this book.

The novel is rather peculiar. After the first few chapters, I was somewhat appalled. The protagonist, Kinch Na Shannack, is a thief from the Takers Guild, and he is also the one that tells us the story. To say he’s unrefined is an understatement. From the beginning, we are bombarded by crude fart jokes and metaphors straight from the gutters. I didn’t find them funny nor interesting. But the world-building looked fascinating, so I decided to keep on reading, and I wasn’t disappointed.

It may be hard to believe after reading those first few chapters, but as the story progress, Kinch grows on us. I can’t pinpoint the exact moment when it happens, but his stupid jokes became endearing (well, at least some of them!).

What is striking from the very beginning is the wealth of world-building. We have a detailed map with loads of different countries, and they are not just the names on the page. They all have their languages and little quirks that make it easy to differentiate them. Kinch, with his rare talent for foreign speech, often comments on language variations and collects vulgarism from all the nations, so be ready to learn some amusing expressions.

The story is an epic journey that forces the unlikely companions to work together to survive the dangers and fulfil their agendas. Of course, with the quest progress and blood spilt, they form bonds that can’t be easily broken.

I loved the idea of magic tattoos that provides owners with loads of unique benefits. Also, the Takers Guild’s hierarchy and methods were fascinating. Kinch was one of the lowly thieves called a Prank and was deeply in debt for all the guild training provided for him. The ways of reminding the debtors of what they owed were original and well thought.

I enjoyed the book despite the humour that usually wasn’t to my liking. I’m a huge fan of stories with an original setting and rich world-building, and what I found in “The Blacktongue Thief” is worth recommending. If you are looking for something different and don’t mind some gutter humour, you should check it out!