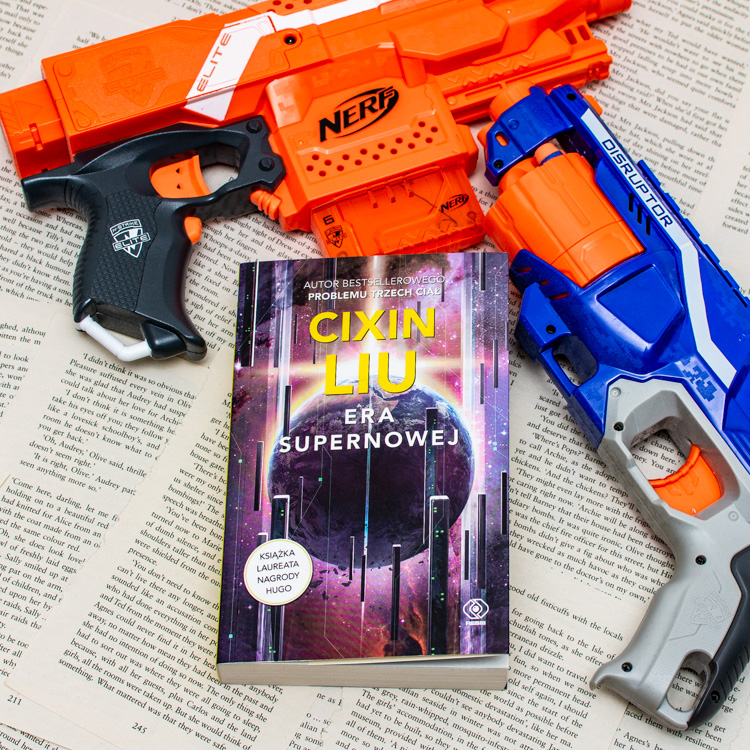 Supernova Era is a book from bestselling author Cixin Liu, author of award-winning The Three Bodies Problem novel. I’ve heard a lot about him and was very excited to read some of his work, although I must admit I was a bit scared of too much-complicated science in his book. But in the case of Supernova Era, it is no problem at all. There’s not much hard science here, it’s more like dystopian political fiction in fact. We have a dying star here, yes, but it’s only the beginning of the whole story.

The Earth is showered by the deadly radiation from the supernova, and although at first, everything seemed fine, people soon found out about grievous consequences of this event. All humankind has left then a year to live, except children under thirteen, who have higher cell-regenerating abilities. Is it possible to prepare children to take reign over the world in less than a year? Can you expect from teenager to learn in a few months for a job his parents spend years of studies and hard work to master? But nothing else could be done. The adults try to introduce children into their complicated world as best as they can in given time hoping it would be enough. No one could predict how the children’s world would look like.

From the first pages, I was fascinated by this book. The author has an exceptional talent to describe a tedious and complicated physical and chemical process as if it was poetry. Prologue about dying star was written so beautifully I could read it all day. The first half of the book, I practically devoured, waiting with the heat on my cheeks for the moment, when the adults finally leave the Earth to children. How will they cope all by themselves? As expected, the first hours of Supernova Era were disastrous. I, as a parent of a small child, could only imagine how terrible it would be to be forced to leave my baby for other children to care for.

Unfortunately, the further into the book, the more boring and monotonous it got. It is written as an emotionless report from the beginnings of a new era, so there is loads of very detailed description of similar situations and events. There’re not many distinctive characters in this book. It’s more like a tale about nations and collectives then individuals. The hardest part for me to read through were the events on Antarctica (I won’t go into details, because I don’t want to spoil the plot for you). It was literary over forty pages of sophisticated descriptions, going on and on. I could really do without it, or at least with only half of it.

But it doesn’t mean I didn’t like the book, because I enjoyed it immensely. I like the way the author showed us that children’s minds are completely different from those of adults. Because of that, all the efforts people of the common era put into preparing youngster to live in their world were doomed to failure from the very beginning. Of course, the vision Xicin Liu is showing us is very troubling and unsettling, but still believable.

I’ve heard it’s not the best novel from this author and considering it was written before The Three Bodies Problem it’s not surprising. But I don’t agree it’s not the best book to start with. I really enjoyed it, and I’ll surely want to read more from Cixin Liu. I think it could also be suitable for people who aren’t entirely sci-fi fans. If you like books like Lord of the Flies or Handmaid’s Tale you should read Supernova Era too!