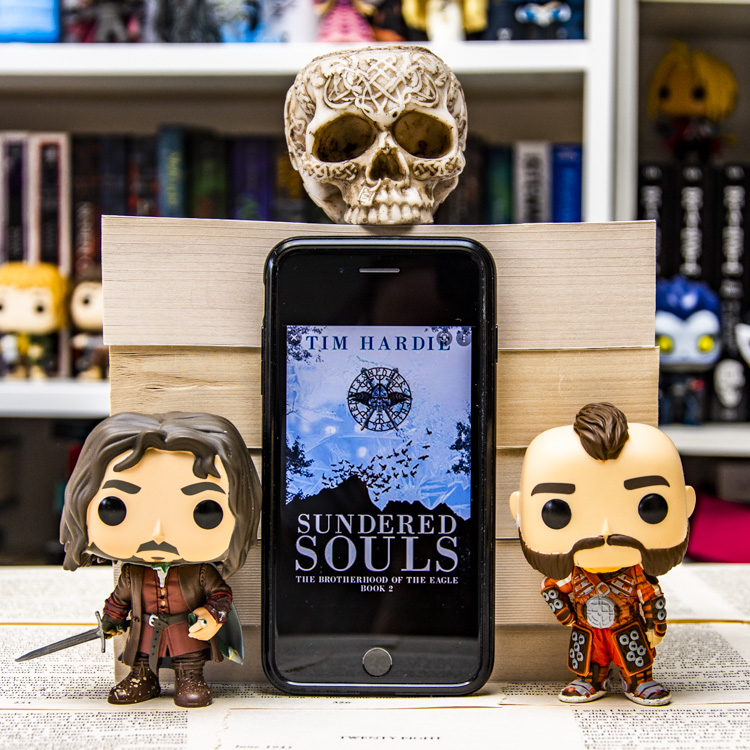 S”undered Souls” is the second book in the Viking inspired epic fantasy series “The Brotherhood of the Eagle” by Tim Hardie. I was lucky enough to receive the ARC from the author and was excited to continue the story of Rothgar and his companions.

Unlike “Hall of Bones”, the sequel starts with a lot more tension. The Vorund Clan has seized control of most land in Laskar, crushing all those who refused to bend the knee for self-proclaimed King of the North, Adalrkir Asmarrson. Rothgar joined Johan Jokellsward, and with their newly formed Brotherhood of the Eagle, they fight against oppressors and lend a hand to those few who are still resisting.

What is also new is the mystical elements that this time is ever-present. The protagonist’s rare talent – Sight – from a mere curiosity becomes a necessity to counter the Durath (sort of wraiths possessing people) and the dark, foul magic that the Vorund Clan is employing. Even though only The Brotherhood is fully aware of their foe true nature, the rest of the world will have to catch up quickly and accept supernatural aid, to survive.

The story is narrated mainly by Rothgar, but thanks to his Sight, he also has access to other people’s perceptions (an excellent idea for introducing more POV). Thanks to that, we learn the story from different people and places, which gives us a broader perspective on what is happening.

I loved the tension between different factions. All the Clans used to compete for influence and power, but to stand against the invaders, they must forget their differences and long history of disputes. The matters became even more difficult, as some of them already swore the allegiance to the King of the North. Could they be swayed to support the seemingly doomed rebellion trying to liberate Laskar? Or will the Brotherhood have to fight their former brothers and companions in a bloody war that benefit only the Vorund Clan?

There are few new characters, like Jolinn Hrodidottir (yay for a shieldmaiden!), and others, known from the previous book, get a bit more spotlight, thanks to changing narration. But the cast of brave warriors, jarls, and supporting characters is so vast that Character List comes in handy to distinguish who is who.

What I also liked was the main character, Rothgar. With all the terrible things that happened to him, it is easy to forget how young he is. But there were many scenes where his reactions and behaviours are reminding us about his age. He could get sulky, or jealous, or rebellious, even though he should have known better. That’s what makes him more human and more relatable.

The whole story is an exciting read. The seemingly impossible mission the Brotherhood took upon itself leads to an epic and bloody battle, where weapons and magic clash, and until the end, we can’t tell what the outcome will be. It also leaves us with many questions regarding the future and wondering what will happen next.

I enjoyed “Sundered Souls” even more than “Hall of Bones” as it’s more action-oriented, and the stakes are even higher this time, which means Rothgar’s life will not be getting any easier. If you are fans of epic fantasy incorporating Viking culture, you should check out this series.