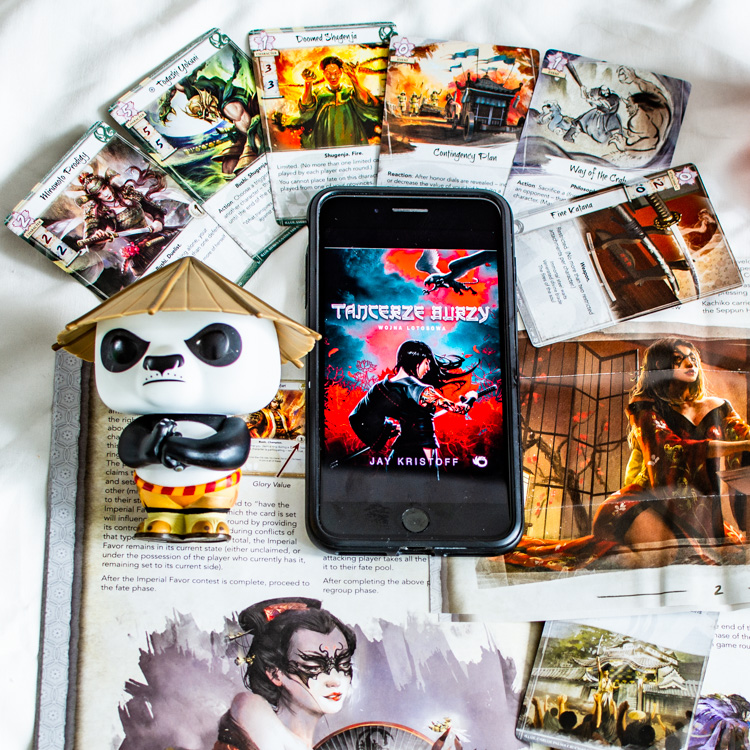 Stormdancer by Jay Kristoff is a dystopian fantasy story based in Asian inspired isles of Shima. They are govern by cruel Shõgun who’s ruling with his whims and cooperate with mysterious Lotus Guild, who invented loads of useful machines and improvements but the lotus fuel they use is so toxic it’s killing the isles and its inhabitants.

Our protagonist is Yukiko, a young girl whom father is a hunter and a faithful servant of Shõgun. They are ordered to hunt a mythical Arashitora, a beast who was extinct for a long time. But they can’t refuse the order and so they embark on the impossible mission with no hope of success. What they’ll find exceeds their wildest dreams.

Yukiko is a very sensitive and compassionate girl. She also has special power, which enables her to communicate with animals, feel they feelings and sense thoughts. She is also a bit rebellious, she doesn’t like what the Lotus Guild is doing to people and is not afraid to talk about it loudly, to his father dismay. This could get her into serious trouble, because the Guild is actually almost as powerful as Shõgun and they use propaganda to keep people in check. What’s more, people with her special powers are burned on the pyres.

Luckily for her she is sent to the mission with her father and ends up in the wild, far from guild and it’s influence. Thanks to her compassion she’s earned herself a debt with a beautiful and extremely dangerous creature, who she called Buruu. While they only have each other in a dangerous wilderness they develop very unlikely bond, which is growing deeper as the action in the book progress.

I like how the author create interesting, engaging story while using foreign, exotic country setting. I am no expert on Asian culture so I can’t say how much of what book shows us is authentic, and how much are just a popular stereotypes. But I liked it all. The honour driven society of samurais where they serve their Shõgun without second thoughts. And mythology was really interesting, with it’s demons and beasts.

I think the story itself was really good. While I was reading it I was constantly afraid for Yukiko’s and Buruu’s life. For the last few chapters I couldn’t put it down, I was so hooked. I can’t wait to read the next book, because I’m very curious what will happen after the ending and how the Lotus War will progress.

If you are fans of epic fantasy stories with amazing, mythical creatures I’m sure you’ll love that one!

Thank you Uroboros Publisher for sending me this book for review!