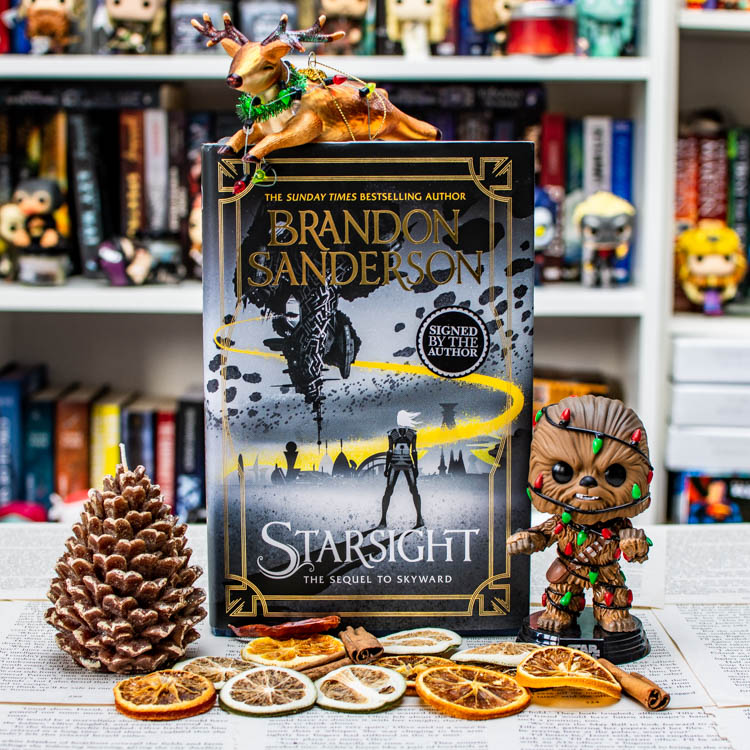 “Starsight” is a brand-new sequel of Brandon Sanderson’s “Skyward”. A word of advice, if you haven’t read the first book, please don’t look at this review, because it will probably contain loads of spoilers to it. Writing a review of the sequel I would expect the readers know the ending of the previous book. So yeah, you’ve been warned.

From the very start, “Starsight” is action-filled. We find Spensa in the middle of a space battle, fighting with merciless Krells. But the story takes a very different turn. I was expecting another book filled with DDF’s desperate attempts to survive, but to my amazement, the author has a completely different vision. Ladies and Gentlemen, we are taken of Detritus to see more of the galaxy!

It was a great turn. What I love the most in Sanderson’s book is worldbuilding. And although we’ve seen a lot of great things in “Skyward”, to be honest, it was more like a teaser, promising us wonderful things to come. And with exploding ending, it left us with more questions than answers. In “Starsight” we have it all. Spin gets herself out of Detritus and in the middle of Superiority prospering space station, where she is surrounded by loads of different aliens, all of them weird and complicated.

I was a bit disappointed, as M-Bot doesn’t play an as significant role in this book. I love his interactions with Spensa and his sense of humour. Although it doesn’t mean he is not important. He is evolving and going through the process of discovering his true self, asking very troubling questions about what’s making the thing be assent as living.

We also don’t see much of our original pilots’ crew. They are mostly just in the first part of the book. But worry not, we got a whole bunch of new alien characters, who are just as exciting! All the species are described with loads of details, so our imagination has a lot to do. Just to pick your curiosity, we will meet a nefarious Krells in their big carapaces, a flock of fox-like creatures with love for poetry and diones, whose parents merged into one organism to create offspring. All those aliens live in what seems to be peace-loving existence. But Spin knows better, they are the ones who are keeping her people contained on Detritus.

We also learn more about cytonics abilities and what are those eyes Spensa is seeing among the stars. It turns out that there are far more dangerous threats in the galaxy then Krells and their drones. Our heroin will have to make some hard choices and choose what the lesser evil is.

I like this book even more than “Skyward”. We know a great deal more than in the first book, Spensa is far more mature and the world is wonderful and alien. It has all I love in sci-fi: space battles, loads of different kind of aliens, a primal species threatening to destroy whole galaxy and loads of scheming politics.

Brandon Sanderson, as always, never fails to deliver a fantastic experience. I can’t wait to see what else he is planning to do with the story and where the adventure will take Spensa next.