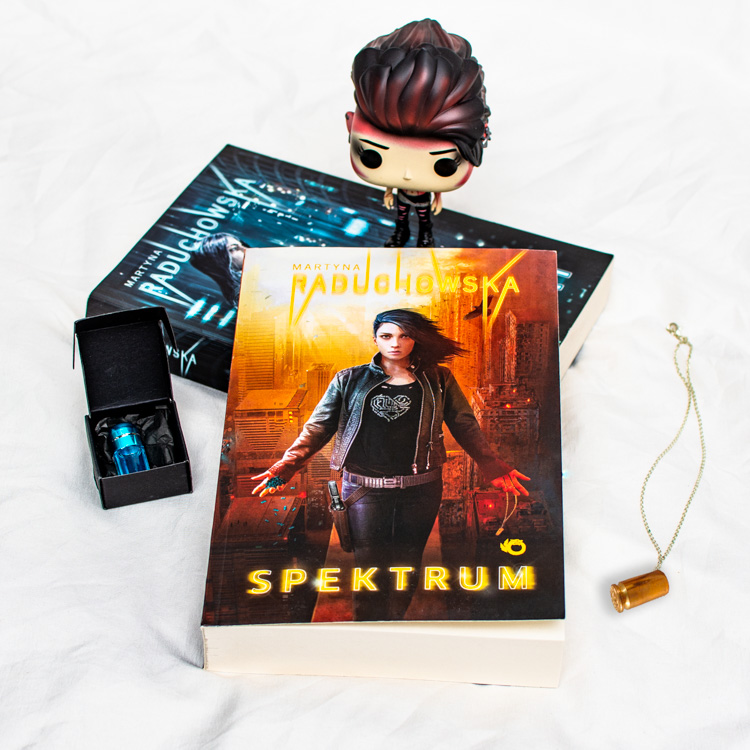 Spektrum by Martyna Raduchowska is the second book in the Black Lights series. Before I read the book I’ve heard it’s not typical continuation. It covers the same time period and events as first book. But this time the story is said from perspective of May the android.

Firstly I wasn’t thrilled with this idea, I wanted to know what happened next? But I actually liked this book more than the first one. I like Maya as protagonist, who despite her good intentions is called a traitor and have to flee to the Wall to save her life.

Since the very beginning we are witnessing May’s constant battle to remain self aware. Our heroine is not sure what caused her awakening, if it was electric attack or something else. But she is determined to do everything in her power to remain this way.

Unfortunately she couldn’t choose more dangerous moment to become self aware. Because of the bloody rebellion in the city all androids are treated as suspects and the smallest sign that something is out of ordinary means deactivation, which is execution. May have to be extremely careful, because even though now she can lie easily, her odd, emotional reactions could be her downfall. And one mistake is all it takes. There is no second chances. Despite it all May is still trying to protect unconscious lieutenant Quinn. But as it turns out, one android is not enough to stand in a way of people with power and dark plans.

The new thing the book shows us is the actual life behind the Wall, in Dark Horizon, where May is living and trying to survive while waiting for her chance to meet with Quinn once again. New people are introduced, friends and enemies. Very interesting character is Siobhan, another rebel android, who was severely traumatized by her previous owner’s treatment.

While the first book has a very interesting storyline, this one is a tale about May, a lost android who only wanted to live amongst people and feel emotions like them. Throughout a book May is struggling with finding what is her real self and what is just a code she was programmed with.

I’ve binge read this book and it was a real pleasure. I’m huge fan of androids stories. It also remained me about video game Detroit: become human. It has very similar vibes and atmosphere. All fan of this book should check out this game too! ;) But after the end I feel a little unsatisfied. The author gave us a little more information, but it’s just a teaser of what may come in the next book. I think I would prefer to have one more chapter instead of repeating the same conversations we read about in the first book, when May and Quinn are finally meeting. But I loved it anyway!

Thank you, Uroboros Publisher, for sending me a copy for a review!