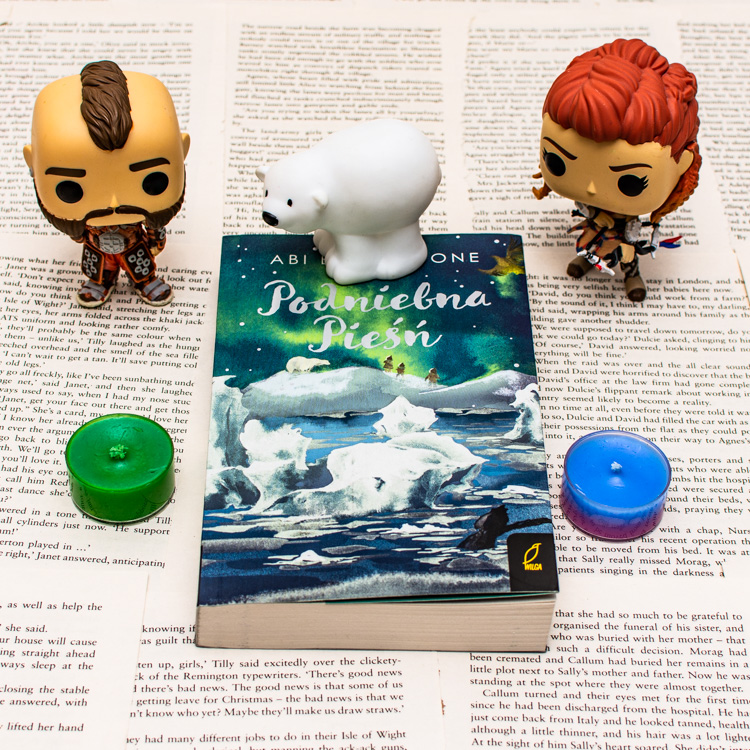 Sky Song by Abi Elphinstone is a beautifully written story about courage, hope and unbreakable bonds of friendship. Kingdom of Erkenwald is facing hard times. Evil Ice Queen is reigning over the kingdom and after her victory in a great battle she captured all who survived and imprisoned them in her palace Winterfang. Only the children manage to slip away from Evil Queen and they are hiding ever since. But she won’t rest until she lure them all to her, because to rule Erkenwald forever, she needs to possess the voices of all its people.

Flint belongs to Fur Clan and is an inventor. He’s one of the few who still believe in magic and he uses it successfully in his creations. He goes on secret mission to Winterfang palace to rescue his mother. But to his surprise he finds a mysterious girl imprisoned in a music box. Even though nothing goes according to plan, children manage to escape from the castle and queen’s soldiers. And that’s how their adventure begins.

Sky Song is a really enchanting story. And despite it being a children’s book, I’m sure it will charm also adult readers. The author very skilfully paints beautiful landscapes in our imagination, a magical kingdom full of snow, ice and breathtaking views. Prologue and epilogue sounds like a fairy tales and characters are very resourceful children, full of courage, hope and trust in magic and Erkenwald spirits.

I really loved how much effort the author puts in showing that different doesn’t mean worse. Eska, even though cast away by Fur Clan, did not surrender and did not hold a grudge against them. Flint, who was endlessly teased and mocked because of his inventions and trust in magic, never weaver in doing what he thought was best. And last but not least Flint’s little sister Blu, who was so obviously different from other children, was not pushed away from adventure or left at home. Thanks to her big heart and loyalty she was the centre of their new little clan.

Action also never stops in this book. We have crazy escapes on dog sledge, avalanches triggered by dark magic, enormous bears, mythical mountain guardians and much more. And even though the book is full of grief, longing and sadness, the hope is always there and trust, that in the end everything will be all right, the good wins over evil. I can’t wait until my daughter will be old enough so I can read this book again with her.