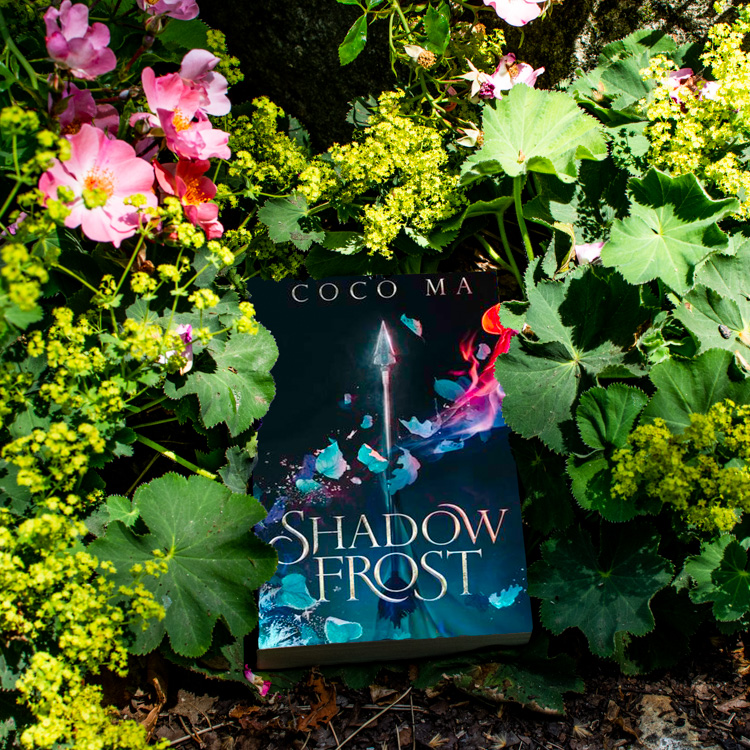 Shadow Frost is a debut novel by young author Coco Ma. It’s the first book in a new fantasy YA series. It’s a story about Asterin, Princess of Axaria. There is a demon terrorising her kingdom, and it seems that she’s the only one who can defeat it. Together with her friends and elite guards, she’s embarking on a hunt. But none of them can predict the outcome of this journey.

This book is full of action, adventure and has an impressive magic system. There are nine elements that a person can wield, like water, air, ice, fire, and so on. Most people can use about three of them, but there are legends of some, who have powers to command them all. There is also the tenth element, shadow, but it is forbidden in all of the kingdoms, as it’s too powerful and hazardous.

While reading this book, I could tell that it was written by a young person. There are loads of situations that, for me, seems very childish and made me roll my eyes. Party banter was mainly based on teasing between the members, and they could go on like forever. Some scenes were so typical it was cliché. Like the one, where two guys are coming into princess bedroom, and she is of course in very short, sexy nightgown and then they duel anyway, because why not. The other thing I really didn’t like, was a habit of one of the male characters to call a princess a brat. And of course, she didn’t mind or whatsoever. What was that about? It was neither cute, nor did it fit the scenery of a fantasy kingdom. And it was going on for the whole book.

The start was also very slow. In the first few chapters, not much is happening. There are just scenes from the life of Princess Asterin and mostly occur in her rooms. If I wasn’t reviewing this book, I don’ t knows if I would continue reading until finally, some plot starts.

But the story does have potential. The magic system was quite enjoyable, besides elements, there were also affinity stones needed to do magic. There were Immortals, the gods who, in theory, did not interfere with mortals, but sometimes they do appear to help or guide them. And there is an evil Shadow God, most powerful of them all, who is not playing according to the rules and keeps influencing the human world. There is a powerful, immortal demon and loads of dark magic spreading through the realms.

Then again, the world was not described in many details. We know the kingdom of Axaria, where the action happens, and we know there are some other realms. But not much besides that. There was one scene at the end of the book with a great ball (of course there had to be a ball!) where all the royals from all the kingdoms came, and the author tried to describe them all in one paragraph. I just got to the third one, and then skipped the rest, because otherwise, I would fall fast asleep.

I think that this book is more for younger readers. Maybe they would not be discouraged with the author writing style. I’m sure the author will get better in her writing, as it is her debut book. Because some ideas are amazing, it’s just the execution that is something to work on.