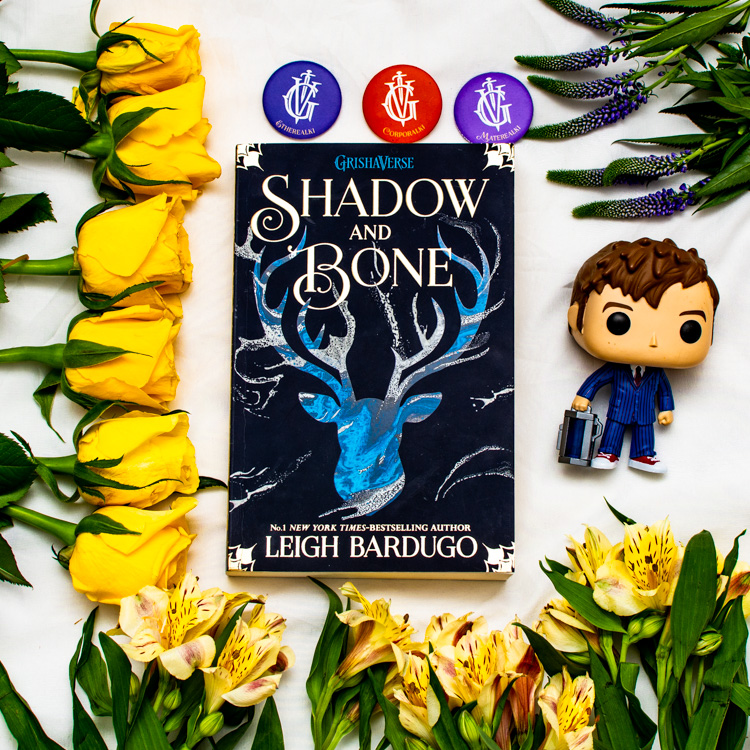 Shadow and Bone by Leigh Bardugo is the first book in The Grisha Trilogy. I’ve read Six of Crows duology by this author and completely fell in love with it, so I was very exited to read more stories from Grishaverse.

Our main character is Alina Starkov who is just another soldier, not very talented, certainly not very popular. She just want to get by, staying close to her only friend Mal, who is one of army’s best tracker. Everything changes, when they’re trying to cross the Shadow Fold, unnatural darkness crawling with monsters, which divides Ravka in half. They are ambushed by hideous beasts and suddenly Alina discovers that she posses some mysterious power she never knew was there.

Of course it didn’t go unnoticed. The Darkling himself, the most notorious and powerful Grisha there is, takes her under his wing and send to the Little Palace, where all Grishas are trained.

I really enjoyed discovering the magical world of Ravka. I was intrigued by Grishas’ powers after reading Six of Crows, but we didn’t have much information there. Here the author give us much more. We follow Alina to the place which is in fact school for users of little science (as Grishas are also called). We see how divided they are considering types of powers they wield. There is strict hierarchy and everyone is fighting hard to gain more favours from the Darkling, or the King.

The first half of the book was average I think, it was nowhere near the level of Six of Crows. Alina is struggling to find herself in new situation and with her recently discovered power. She can’t grasped how to use it and it seems to be always slipping away from her fingers.

But then we’ve got a definite improvement. Suddenly there was a big twist and the story became a lot more interesting. I like that it was also hard to predict how the author will proceed with the story, where would she steer it. My mind was constantly thinking about different ways the tale could unfold and I was never hundred percent sure what will happen next.

When it comes to the characters, there were some very interesting ones, like Darkling and Genya. When it comes to Alina I have mixed feelings. She wasn’t irritating, but she wasn’t great either. Most of the time she was very passive and bland. But maybe it’s because of her background as an orphan who was never really seen. I hope that in next books she will be more confident and bold.

After all I liked this book. It was interesting, the story progressed at the end and made me read late into the night. I certainly recommend it, but I think that it’s better to read it before Six of Crows duology, not only because the events from the trilogy happened earlier, but because then we would have better understanding of the world Leigh Bardugo created.