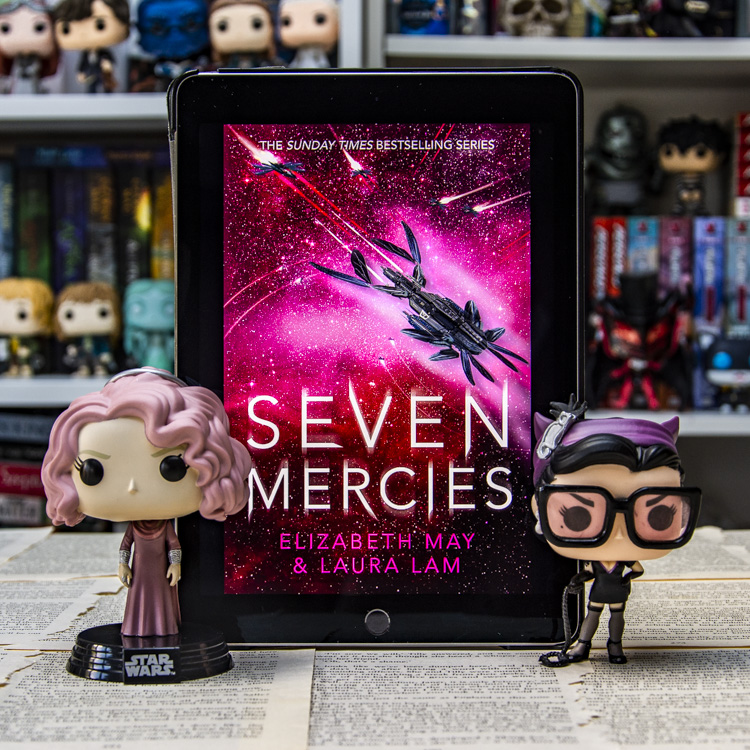 “Seven Mercies” is the second and last book in the “Seven Devils” series by Laura Lam and Elizabeth May. I instantly liked the title and the connotation behind it.

When the book starts, the characters are in a pickle. After an explosive end of the first book, most of the Novantae resistance is in shambles, and Seven Devils must scramble for their lives and avoid Tholosians soldiers and bounty hunters. But even overwhelming odds could not thwart the rebels’ desire to fight against the tyranny and help people that the empire enslaved.

All seven characters have their point of view here and loads of past and traumas to deal with. I liked the themes used in the series: rebels against the evil empire, mind-controlling chips, ever-present, powerful AI gone rogue and impossible missions to save the galaxy. Also, immense respect for how diverse the book is with LGBT characters and non-binary folks, emphasising that finding your own identity against external pressure is the right thing to do.

Now, my problem with the story mainly was connected to many characters. They are all interesting with diverse pasts and experiences, but in my opinion, the duology is not enough to give all their stories justice. I struggled through the first half of the book, and I shouldn’t because I like all those tropes. But having seven different points of view was very distracting, considering each character was doing their own thing. As soon as I got into one story, I was pulled out, and before I returned to this character, I forgot what I was excited about. I think such a diverse cast of characters works well in a huge series, with six-plus books like The Song of Ice and Fire, because then we have time to get to know characters well. Here, all the stories felt as if we barely touched the surface.

On a lighter note, I appreciate that Cato got his own point of view and complex storyline. I felt that in “Seven Devils”, he was a kind of background paper-thin character who didn’t fit into the feminist crew of badass girls. What’s more, I think his back story was the most exciting and surprising of all, and it was the highlight of the whole book.

In general, “Seven Mercies” is a solid, diverse sci-fi adventure, so you should give this series a shot if you like space operas and look for something with good LGBT representation.