The Renegades by Marissa Meyer 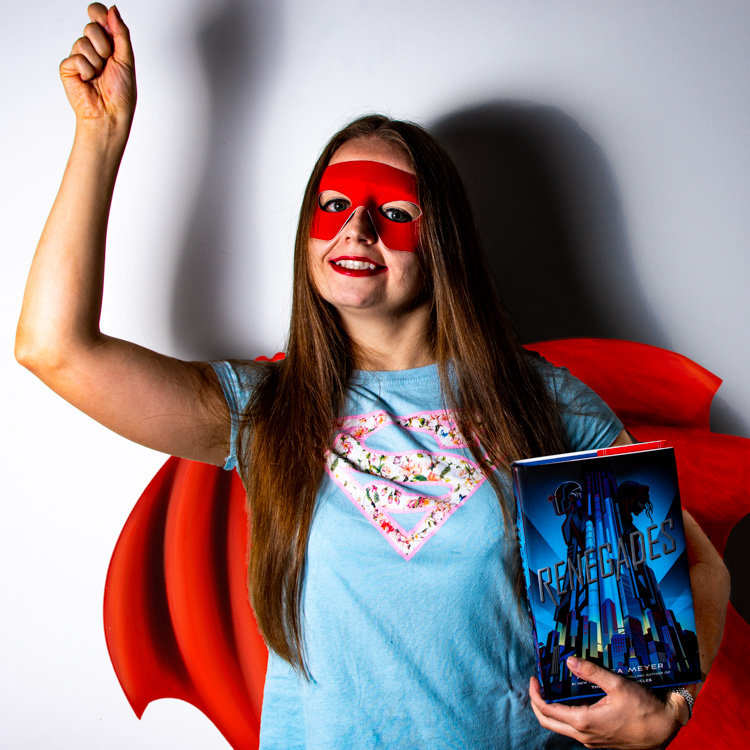 Title
The Renegades by Marissa Meyer

The Renegades by Marissa Meyer is a story about people with extraordinary powers - heroes and villains. It sounded like my kind of book. I love all the comics and movies from Marvel and DC about superheroes! And I was curious about this author, as I haven’t read the Lunar Chronicles for which she is praised so much. So when a friend suggested me to read it I was on it!

And then the reality came. This is a really big book. Hardback has about 550 pages (and I got myself a hardback because paperback was just plain ugly!). But hey! Superheroes, right? It has to be great! Unfortunately, not so much.

One of our main characters is Nova, she lost her whole family when she was just a kid and blame currently ruling Renegades (superheroes) for not protecting them from the criminals. She was then took in by her uncle who is no less then archvillain Ace Anarchy. The girl has also her own set of superpowers - she can send you to sleep with her touch and don’t need to sleep at all herself (I want that superpower!!!). So we have great potential for the good story right here!

The other protagonist is Adrian. He lost his mother when he was a kid too - murdered by mysterious villain who has never been found. After that he was adopted by a gay couple of THE superheroes - the most powerful and popular of them all, who are currently ruling the city. Adrian also has amazing superpower - he can draw and bring to life anything, as long as he can think it is possible. Which means practically everything. So we have two protagonists from opposite camps who meet not fully aware of the whole backgrounds (secret identities!).

First of all, there’s a lot of characters from the start of the book and I was constantly checking who is who (we have a nice list of them at the beginning of the book which was really helpful!). And they all have their superhero names, but actually everyone knows who is who, so I have no idea what was point of it. There are literally two people in the book whose identity is unknow. But let assume it was just to feel the superhero vibes.

Second, in current day the city is ruled by Renegades, superheroes who bring down evil villain Ace Anarchy and put the end to the long years of Age of Anarchy. And it’s like hundreds of them - people with superpowers who are part of the organisation. And we meet the villains, who survived the great battle of good and evil. And it’s six of them. Yes, six. For the whole book we don’t see any mention of anyone else beside the original Anarchy crew who is not a Renegade or aspiring to be one. Like, really? Where are all this bad people who use their superior powers to crush the weak and take advantage of them? It seems they all runaway when they saw the superheroes army. There are mentions of raising crime rate in the city, but super criminals are never mentioned, it all seem to be regular gangs. Not much bother really.

The main events really starting when Nova joins Renegades incognito (she’s one ow two Anarchy members who’s real identity is unknow) and tries to find away to bring the whole organisation down. Sounds promising, right? Not so much. For the whole book nothing really happens. There is no master plan there. Just let’s do it and hope for the best! And the whole infiltration is executed so poorly, that it should be detected after five minutes. But of course it isn’t, because everyone is suddenly completely blind and dumb and all the villains who should be selfish and should fend for themselves suddenly are protecting Nova’s identity for all costs. It wasn’t convincing at all!

The author wanted to show us that nothing is black and white. The Anarchist are the facto just caught up in the villain reputation, while the only thing they seems to want is to be left alone. While the Renegades are often the bullies, who are abusing their position and power to get back on the said villains. I think it went a little to strong, cause we find ourselves sympathizing more with villains and the real superheroes are very hard to come by.

The problem I have with this book is that it feels like the whole of it is just the introduction to the story. It took me a long time to read it all and I didn’t really feel it. When I had only hundred pages left instead of reading I was cleaning my whole apartment. That is not happening, when I like the book. Usually I just binge read it until I’m finished, not caring much for surroundings. And I really didn’t like the ending. It felt like the author was trying to convince me to buy the second book just by putting a big, fat twist which was, in my opinion, ridiculous and I didn’t like it one bit!

I’m not sure I’ll read next books. I’ve heard that the author tend to making first books in series more introductory and latter are better. But for now, I don’t feel a need to read it. The Renegades are a decent book, but in my opinion it’s far too long compered to amount of plot significant actions. And it’s not that superheroes are a hard topic to write about. If you are looking for good YA story with superpowers I recommend the Reckoners series by Brandon Sanderson (fan girl alert!). It is far better then this one.