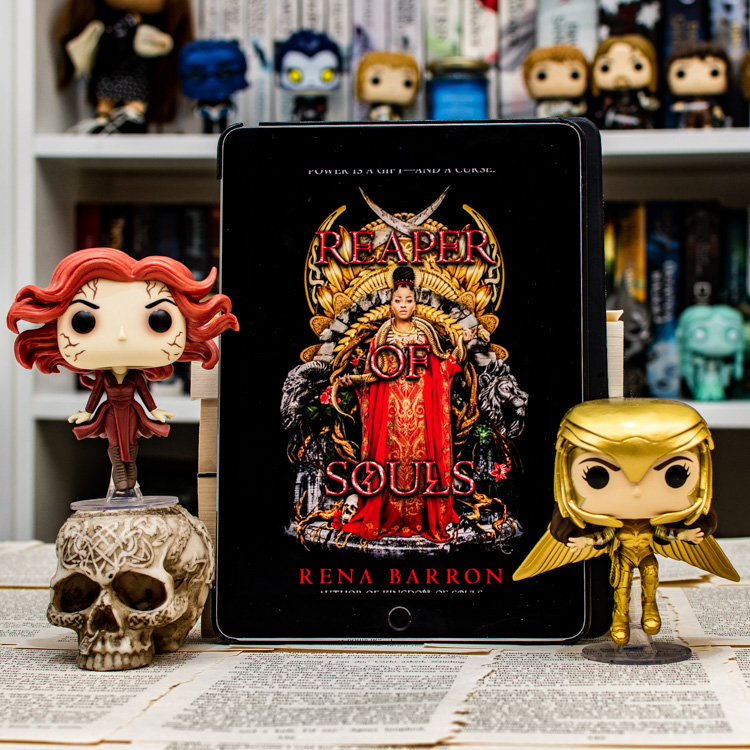 “Reaper of Souls” is the second book in a “Kingdom of Souls” series by Rena Barron. After the disastrous conflict with her sister Efiya, Arrah is left as the last living witch doctor. Driven by guilt, she returns to her hometown to discover she is treated either as a dangerous freak or the chosen prophet of Orishas (gods). To make things worse, she can’t even touch the boy she loves, as their powers continuously clash with each other, causing them pain. When she discovers that there is a possibility that some of the tribes survived, she embarks on a dangerous journey to find them.

I think the sequel of “Kingdom of Souls” is less chaotic than the first book, what makes it even more enjoyable. Arrah’s biggest dream was to use magic, but now she ended up as the only one who can. And suddenly it’s not as wonderful as she imagined. It turns out it is hazardous. Thanks to combined spirits of all tribes’ chiefs, she wields unimaginable power and has access to all the rituals her ancestors ever knew. But all that knowledge comes with temptation. Everything could be resolved so quickly, just with a flick of her fingers. All that magic power draws the attention of demons, who are still plotting to bring the Demon King back and take over the world.

We follow the story from two points of view, Arrah and Rudjek. There are also chapters with the tale of Unnamed Orisha, where we slowly learn the story behind the Demon King’s origin. Thanks to those we also discover a great deal about the other Orishas and the whole universe, consisting of different worlds. I enjoyed learning all those old and forgotten tales, and how they incorporated more tension to the main plot, slowly revealing their secrets bit by bit.

The story based on folk magic and voodoo rituals is still very dark at times, but I find it fascinating. I think it’s the thing that differentiates this series from other YA books. It can be brutal at times, but it all fits well with the author’s world. Arrah is not a beautiful enchantress that waving her wand around – she is a witch doctor, with missing teeth, years of her youth traded for magic and concocting blood medicine that would disgust most people.

There are several twists in the novel, some are unexpected, and others are a bit much, and I didn’t always find them believable. But the ending is genuinely epic, leaving us wanting more and waiting impatiently for the next book.

I think “Kingdom of Souls” series is a unique story among recent YA books. If you enjoy unusual settings and dark stories where demons can eat your soul, you should give this book a try.