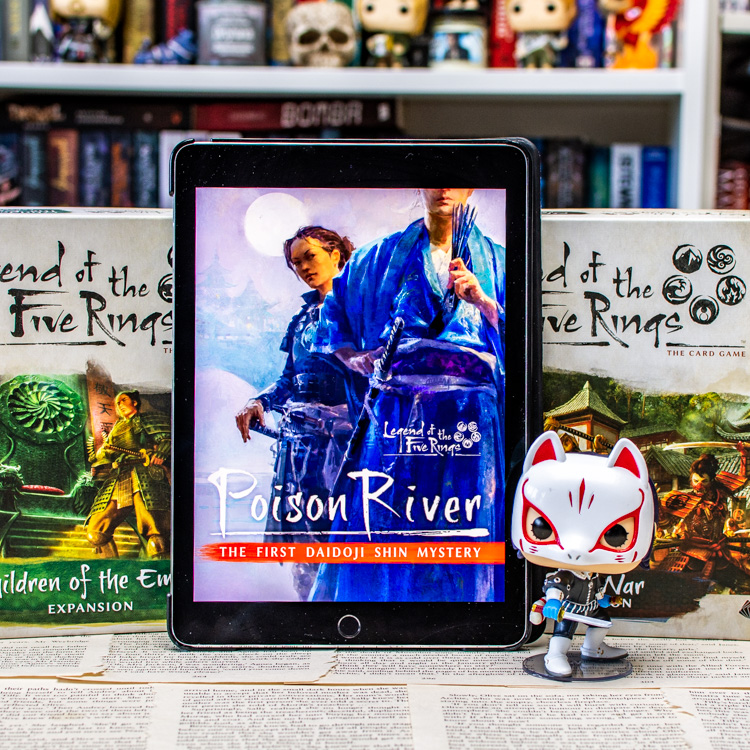 This time we the author takes us to a very peculiar location – the City of the Rich Frog. It is unique because it doesn’t belong to any of the great clans exclusively. Three of them – Lion, Unicorn and Dragon - have parts of the city under their jurisdiction while the imperial officer governs the whole municipality. Those who are familiar with the lore of L5R can only imagine how much tension one must feel in this little town.

As if that was not enough, the city is a high prospering trade node for the region, so the other clans also have their representatives in place, making sure commerce is not disturbed by petty squabbles of their competitors. That was also the role that Daidoji Shin from the Crane clan was supposed to fulfil. Although, he already managed to earn himself a reputation of the wastrel and good for nothing hedonist. Shin happily spends his days on wasting money, gambling, and enjoying shameful entertainment such as theatre. But his careless days of leisure are interrupted by request from governor which he can not refuse. He is tasked with investigating the case of poison rice.

For me, the most vital feature of the book is the involvement of so many great clans (Lion, Unicorn, Dragon, Crane). I’m sure all fans of L5R will be delighted to read this convoluted mystery. The author did brilliantly in portraying all the clans, their characteristics, little quirks and petty squabbles. The main character, Shin, is a perfect example of that. Even though he is not typical Crane (being the odd one who kept only bringing shame to his family), we can still see strong traits of his origin. He has a brilliantly sharp mind, excellent knowledge of all protocols and customs (though he very often intentionally ignores them), and fluency in telling and detecting lies.

Shin is a very likeable character. Beneath his image of foolish flippancy hides a vivid mind, that carves constant challenges and stimulation to keep out of boredom. Once he engages in the investigation, he spares no means to dig up the truth. And to find it he would have to rely on all his assets. Because in the end, it’s not only about finding the culprit, but also about keeping a status quo and prevent the conflict that could easily tear the city apart.

Like in all classical detective stories, Shin also has a partner, who in this case is his bodyguard Hiramori Kasami – no-nonsense samurai who treats her duty of protecting Shin as a burden. Her sarky comments and grumpy demeanour work brilliantly with witty and sharp-tongued Crane.

To enjoy this particular novel, I think it is good to be familiar with the basic lore of “Legend of the Five Rings”. There are so many vivid details from the Rokugan that fans will enjoy. But, at the same time, the meaning may be blurred if the reader is a complete novice in this universe. Some things are left unsaid as if the author assumed his audience is aware of them but could be confusing none the less.

“Poison River” is the first book in “a Daidoji Shin Mystery” series so that we can expect the return of witty Crane soon, hopefully. I will gladly read the next book, and I hope we will learn more about the protagonist himself and why exactly he became the black sheep of his Crane family.