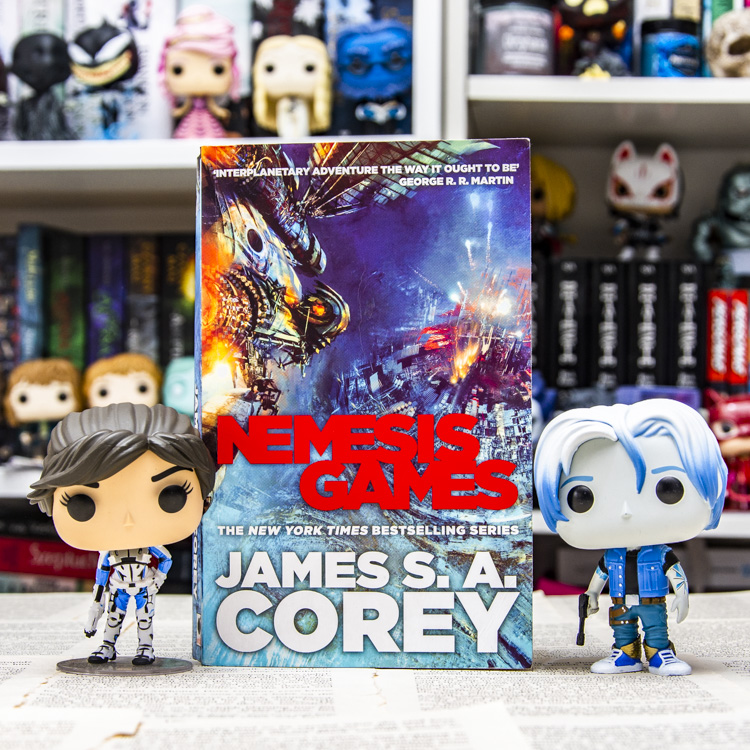 “Nemesis Games” is the fifth book in “The Expanse” series by James S. A. Corey. And what a book! I think it was one of my favourites so far.

First, we have chapters from the points of view of all Rocinante crew members, whom I adore, as they highlight the whole series. When they finally reach Tycho station after New Earth, poor Rocinante is wrecked, and the repairs will take good few months. Using the downtime, the crew decides to take care of their personal matters. Funnily enough, all at once, they leave poor Holden alone, setting off in different directions to confront their pasts.

In the meantime, the worst ever terrorist attack happens, leaving characters stranded across Milky Way without contact, which sucks and undoubtedly cause Holden to gain more grey hairs. I must admit I loved it all. Usually, with this series, there are some chapters from other characters that I often find tedious and not very captivating. But not here. In “Nemesis Games”, we have the essence of “The Expanse”.

Naomi is confronting her past (and we finally learn about her time in radical OPA), but she might take one step in too deep. Alex is going back to Mars to see his ex-wife, which, predictably, does not end up very good. But he also meets up with Bobby Draper, and together they set off to resolve the case of mysteriously disappearing ships. Amos is returning to Earth first time in ages to say his last goodbyes to an old friend, but unfortunately, he stays a day too long, and shit hits the fan (no, I’m not going to tell you what happens, you must see for yourself). And Holden? Well, he drinks—a lot. And wallow in misery and loneliness. That is until his journalist friend Monica shows him some exciting footage.

It’s one hell of a ride, and I absolutely adored every chapter in this book. If a previous couple of books in this series were just so-so, this one rewarding all the time put into reading them all. I hope the following books will be just as good.