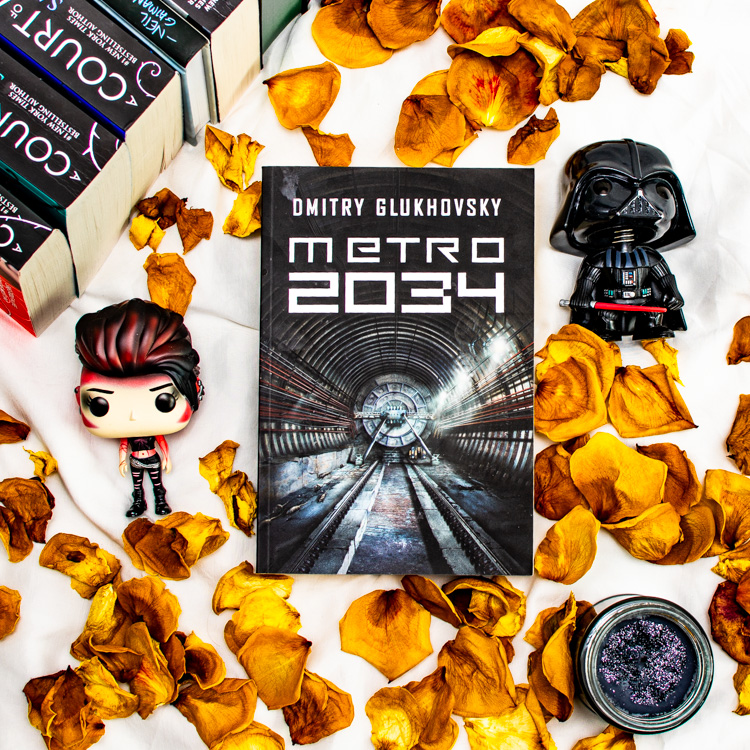 Metro 2034 written by Dmitry Glukhovsky is a post-apocalyptic tale about the people who survived the atomic war and now live trapped in Moscow subway system. The surface of the planet is polluted and now all kind of strange monsters are ruling there. It’s a sequel to a very popular Metro 2033, second book in a trilogy. I loved the first book, it was innovative and original, I was captivated by Artem’s story. Unfortunately the second book failed to impress me.

The story itself is less interesting then in a first book. Unexpectedly all contact is broken with the neighboured station to Sewastopolska. Caravan haven’t came back from there, as well as all the search parties. The command is sending their best men, Hunter, to investigate the case. Surprisingly he’s taking with him an old men, who call himself Homer and want to be a chronicler of survived mankind. No one knows why. Later a young girl Sasha is tagging along with them.

The whole book seems to be walking from station to station, all of them hunted and creepy, filled by different kind of monsters or hostile people. We have less details about the world then in the first book. I wasn’t feeling the story. The characters seems shallow and boring. The only person who picked my interest was actually musician Leonid, who appears in later part of the book. He was the only one who appears to have some kind of character.

I was never fan of instant love idea. Here it was very unconvincing too. Sasha, a young girl, fall in love with the first person who accidentally saved her life and is ready to do everything just to be with him, even though he’s very brutal and violent men who seems to only care about killing things.

The book is also full of philosophical monologues of Homer, who is trying to find a purpose for his life and want to write an epos, which mankind will remember forever. I get it, that in such dire circumstances there are very hard questions about human nature that should be asked. Like, are we still human? Will we be remembered? Have we already forgot where we came from? But it was far too much. One of such monologues was going on for five whole pages (I was counting!) and it took me a lot of time to get through it. It was boring and not one thought from there stayed in my mind.

I like the idea for this post-apocalyptic world. The fact that author want to see how our society would evolve (or devolve) faced with such horrible fate. But I would also like the interesting story to happened there. And I think Metro 2034 is missing it. I’ve heard that next book is no better, so I won’t be continuing the series. I’ll just keep in mind the first very good book that I really enjoyed.