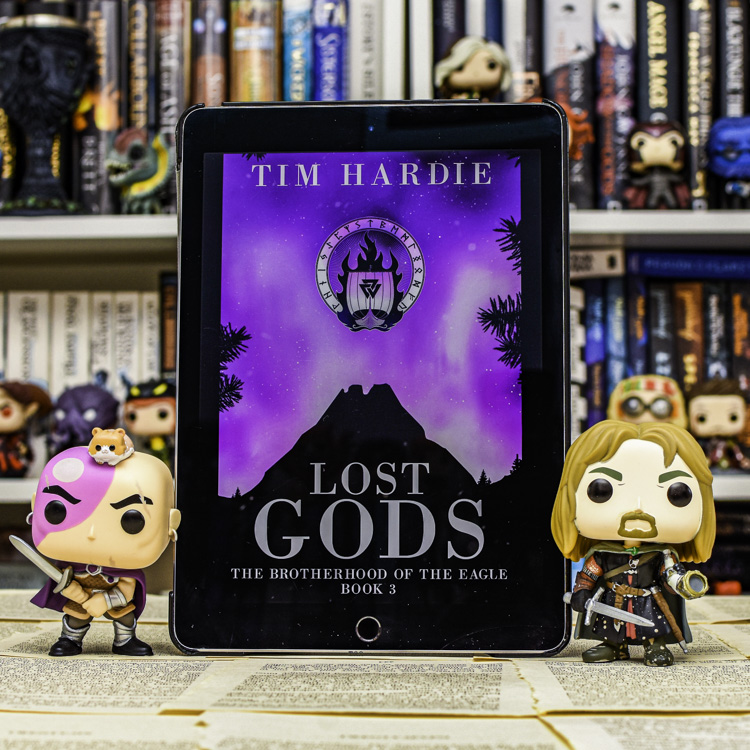 “Lost Gods” by Tim Hardie is the third book in the epic Viking-inspired fantasy saga “The Brotherhood of the Eagle”. I had the pleasure of reading the previous two books, so I was very excited when the author asked if I was up to review the next instalment.

What I love about this series the most is the complex worldbuilding. The world is enormous, and there are so many clans and factions that it was hard to wrap your head around it initially. But once you get into it, it becomes fascinating. Sometimes in books, we see that the side characters are more of the background for the protagonist and lack depth. Not here! Every warrior and jarl - and there are so many of them the characters list goes on and on - has their own history, aspirations, and quirks. It gives the whole story the epic level, where we can watch the events from the perspective of so many people with different social statuses.

I mentioned it in my reviews of previous books in the series, but I still love using the protagonist’s unique ability of Sight - to see things through other gifted people’s eyes to jump between PoV of different characters. I can’t stress enough how brilliant that idea is, but also how much work it demands writing-wise, as narration is changing from first person with Rothgar to third person during his visions and following other characters.

I also think that Tim is great at creating compelling and authentic characters. This talent shines the most with portraying those “bad guys”, the people serving the Vorund Clan who are supposed to be evil. Turns out they are only people trying to do what they can to survive. I even had sympathy for the wicked witch Nereth, who did so many awful things in previous books but now was very vulnerable and very human. Looking at the series, we can see that each book has a different theme. “Hall of Bones” was pretty much an introduction to the whole story – meet the characters, see that their life falls apart and how they try to survive. The second one, “Sundered Souls”, was fascinating and full of action and magic – the Brotherhood of the Eagle was fighting against the overwhelming might of the Vorund Clan and ended with great success and a shifting of power in Laskar. And because of that, “Lost Gods” starts in a very peculiar place. We have a new balance, and after the victory, the Brotherhood of the Eagle must carefully think about its next steps. The theme here is slowly shifting the balance against Vorund Clan and preparing for that ultimate final confrontation – the battle of all battles, which will take place in the last book in the series and I can’t stress enough how excited I am for that one!

While reading, I couldn’t help comparing this instalment to my favourite classic, “Lord of the Rings”. There is this great war with an ultimate evil that wants to break the world, so the good guys must divide their forces and Rothgar, just like Frodo, is sent off with the seemingly impossible mission to talk to the long-forgotten gods to get their help. I loved the use of this classic theme because it’s all I love in the epic tales, and it was like going back to those old-time beloved tales of bravery where even the smallest person can change the world.

The only thing that was not perfect for me was that the whole book felt a little bit like preparation for what will come in the final instalment. There was plenty of sitting around and waiting for things to happen, which is less exciting to read about than constant non-stop action. To be fair, it’s the reality of war, so it’s not like the author portrayed anything wrongly or unauthentically. There is still a great battle at the end that shifts the political situation dramatically, but it somehow felt less exciting than the one at the end of “Sundered Souls” when the failure would mean the end for most characters.

But on the other hand, I think “Lost Gods” is the strongest of the series when it comes to political intrigues and strategizing against the enemies. There were so many plots going on that it was easy to get lost on who worked against whom. It was also great that all those secret alliances were opportunistic. Even though most clans were happy to go against the false king, what would happen afterwards will be very interesting to watch. Kudos to the author for designing such a massive net of interdependencies.