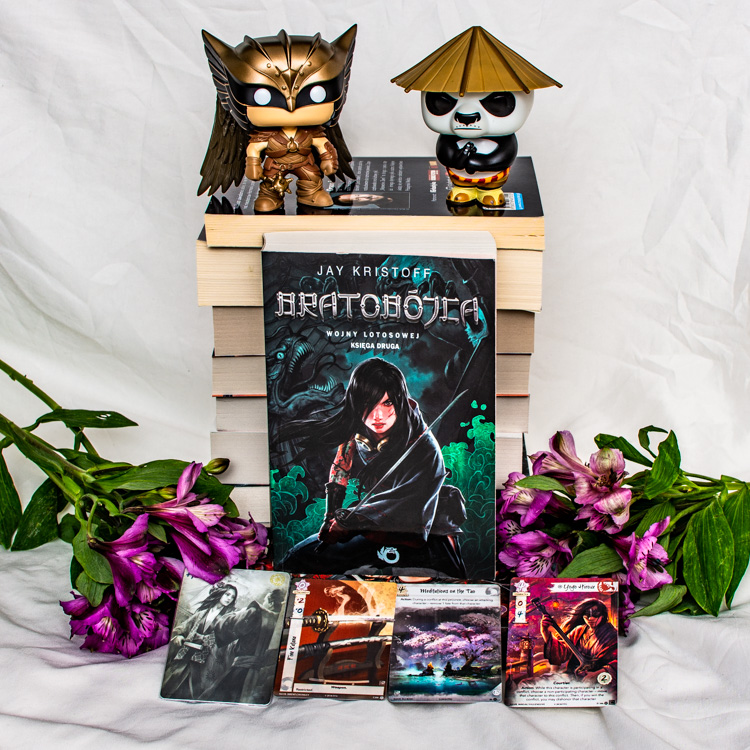 In a second book of Lotus Wars, Kinslayer, Jay Kristoff is taking us to a journey full of grief, loss and chaos. After Shōgun’s death Shima Imperium is facing a threat of civil war. Clans start to prepare for taking the power for themselves and people of Kigen start a riots inspired by the Stormdancer and supported by Kage agents. But the Lotus Guild is working quickly and efficiently, making sure the future Shōgun will be their puppet.

In the meantime Yukiko is trying to cope with grief and anger after her father’s death. This is no easy task considering she’s also facing being an icon of hope for all the people of Shima. She’s struggling to find herself a place in this new, rebelling world. Is she supposed to become merciless killer? The Stormdancer, living myth, who without a doubt destroys all her enemies? Is there any place she can be just herself, a girl full of compassion and care? Or had that girl died a long time ago? To make the matters even worse she seems to have lost control of her powers, which are growing stronger every day, leaving her in constant, unbearable pain.

She has constant support of Kin, a runaway former Guild member who loves her deeply. But everyone from Kage despise him. He’s facing threats and humiliations everyday he stays in their camp. Despite his best efforts to help he’s still treated as untrustworthy spy. And when Yukiko is forced to leave Kage and travels north in search for answers he’s left on his own. How long can he endure being treated like trash?

Michi is stranded in Shōgun’s palace. She’s playing very dangerous game of pretending to be loyal servant of empire. But she’s as determined as ever to help her real Mistress and will do everything to free her and take her to safety. Even if she’ll have to crush her own heart in doing so. I loved her story the most I think. She is so badass!

I love this story and the way the author is telling it. It’s full of action, drama and emotions. There were a lot of times when I was really shocked at how the events unfold. The characters seems real and it’s easy to feel for them and their misfortune. I think Jay Kristoff is slowly becoming an author, that I will buy blindly. Because so far I loved each of his book I’ve read. So if you like epic fantasy tales you are on for a wild ride. Can’t wait for the last book and a series finale!