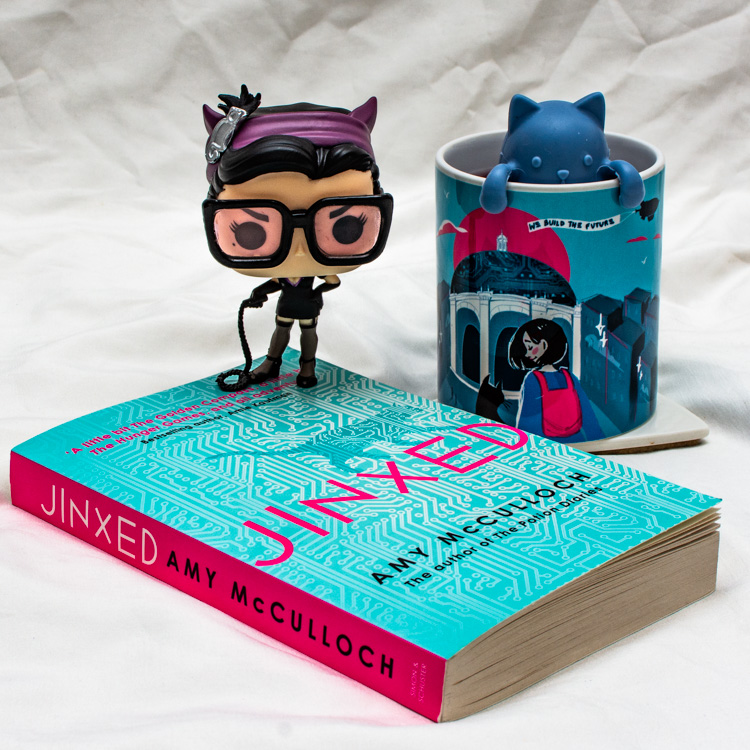 Jinxed by Amy McCulloch is a light story full of humour and cute robotic pets. Lacey Chu is a teenager with a big dream, she want to work for Moncha Corp as companioneer - creator of smart, robotic pets (baku) who are also functioning as advanced smartphones. The first step is getting into prestigious school Profectus. It seems Lacy has done everything in her power to reach this goals, she worked hard and is really gifted in tinkering. But would it be enough, knowing her main competitor from school just happen to be the son of one of the most powerful man in Moncha Corp, and really doesn’t like her? Everything changes when Lacy stumbles upon pile of junk metal which turned out to be destroyed baku cat. Seeing how extraordinary he once must have been, she’s determined to fix him and claims as her own.

It’s a real page turner. Lacy is very likable, she’s smart, hardworking and very determined to reach her goal. I kept cheering her on and keeping fingers crossed for her success. And there is Jinx, her baku cat, who is adorable. He is sassy, sarcastic and very independent, unlike any other baku the world have ever seen. But still we can see the real bond forming between them while the book progress.

I was surprised few times with small twist and turns. I won’t tell you much about it, because I don’t want to ruin your surprise. I found deeply shocked by what is going on inside the school and wasn’t sure if I liked it at first. But then the author explained everything reasonably enough to ease my outrage.

The book has also very unique perspective for AI. The reason why the robotic pets were invented, not human androids, was that people were too afraid of what might happen if suddenly AI becomes to aware of it’s own self, too independent. The pets seemed as a safe choice to put in all the advance technology without our superiority feeling threatened. But what if suddenly one of the bakus became his own person?

Reading this book was a real pleasure. I was taken by surprise again by the ending. I didn’t know that there will also be sequel, but I’m glad we will meet Lacy and Jinx again. There’s a lot of threads that the author left unexplained and I’m really curious about them!

I really recommend this book, especially to younger readers, there are a lot of good role models here - especially females successfully working in engineering. And I like how it shows what real friendship means.