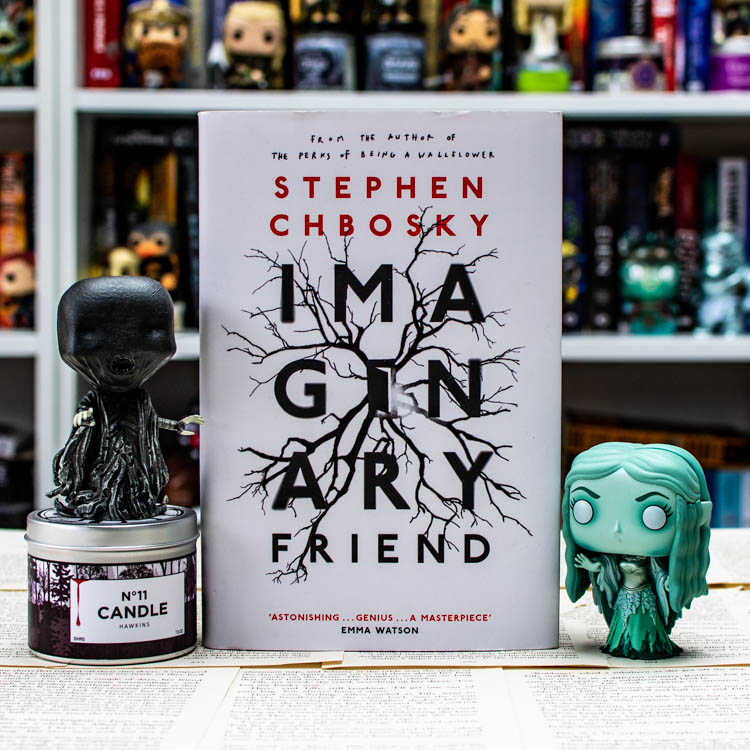 “Imaginary Friend” is a new novel by Stephen Chbosky. It was written twenty years after the release of his famous work “The Perks of Being the Wallflower”. In the meantime, he was working mostly as a film director and screenwriter. He admitted he missed his writing and that how “Imaginary Friend” was born.

The book itself is huge. I was reading through it slowly, I have an eBook and physical copy, so I could get back to it wherever I was. There are opinions that it is far too long, but I think it’s just the writing style. The author tells his story slowly, showing us life in a little town of Mills Grove and its townsfolk. In this aspect, the “Imaginary Friend” has a lot of similar vibes as Stephen King books (Chbosky admitted he is a huge fan of master of horror). I never have a problem with the novel being too long, so I wasn’t bothered at all by that aspect, on the contrary, I quite enjoyed it.

Christopher Reese is a troubled eight-year-old boy. After his father died, he and his other constantly move from one place to another in the hope of finding a place they could call real home. That’s how they land in Mill Grove, small and unimportant town. Kate Reese makes sure her son get a place in a good school even though it causes him great anxiety (he is dyslexic) because he always struggles to keep up with the class at school. One day, while he’s waiting for his mum to pick him up, he notices a weird cloud in the sky. A strange phenomenon seems to be looking and listening to him, so he follows it into the wood. For this moment on, nothing will ever be the same.

“Imaginary Friend’ is like a mixture of “Stranger Things” series and Stephen King books. We have a bunch of kids who are getting into troubles, a small town, a good sheriff and a mother who’ll do everything, to give her son a better life then she had. Because of the length of the book, we get to know all of them well. We learn about their dreams and aspirations, their fears and bad memories. We also learn about other townsfolk too. Thanks to that we get attached to them very quickly. Chapters are written from the perspective of different characters, and the author very skilfully expresses in his writing subtle differences between perceiving the world through the eye of the child and an adult.

It is a horror novel, so you probably wondering If it is scary. It can be really creepy sometimes, yes. And the farther we get in a story, the more terrifying things are happening. But this effect is not achieved by showing sheer brutal scenes. It’s more about suspense, and imagining what else can happen, how bad can it go, and what horrible things can be crawling in the dark.

And even though the idea of another reality next to our is nothing original or new, the characters Chbosky created are unique. There is a terrifying hissing lady, an army of deer doing her bidding and a mailbox people with eyes and mouth that are sewn shut. And a Nice Man, of course. I was lucky to be on an event where Stephen Chbosky was talking about this book and how it was created, and he had loads of funny stories explaining a lot of things we can see in this novel. Like the deer, he always used to see them in his backyard, it was usually quite a delightful experience. But when sometimes there was the whole flock of them standing there and just looking at him it seems very ominous, hence their role in the book.

Christianity plays quite a significant role in this book. The church is important in small-town life, and some of the characters are very devoted. There are also a lot of biblical symbols, like an ever-present conflict with good and evil, people atoning for their crimes and pure faith protecting from all darkness. I’ve heard it bothered a lot of people, but for me, it went well with the story. I couldn’t care less if religion is Christianity, Muslim, or Buddhism. The ideas that people believe in and what’s giving them comfort is indispensable. And to highlight that love and forgiveness wins against evil is not only religion-related.

I highly recommend this book. Even though I wasn’t a hundred per cent convinced to some of the twists, it was still a great story, and I spent quite a lot of time enjoying it. I haven’t read “Th Perks of Being a Wall Flower” but after reading “Imaginary Friend,” I added it to my list. I think the author has a real storytelling talent. It shows in the novel, and it was visible while he was speaking during his book release event. To tempt you even more, I can tell you that soon we can expect this story on a big screen, as Chbosky confirmed he would like to work on it in the next three years. Don’t waste your time waiting then, and read it!