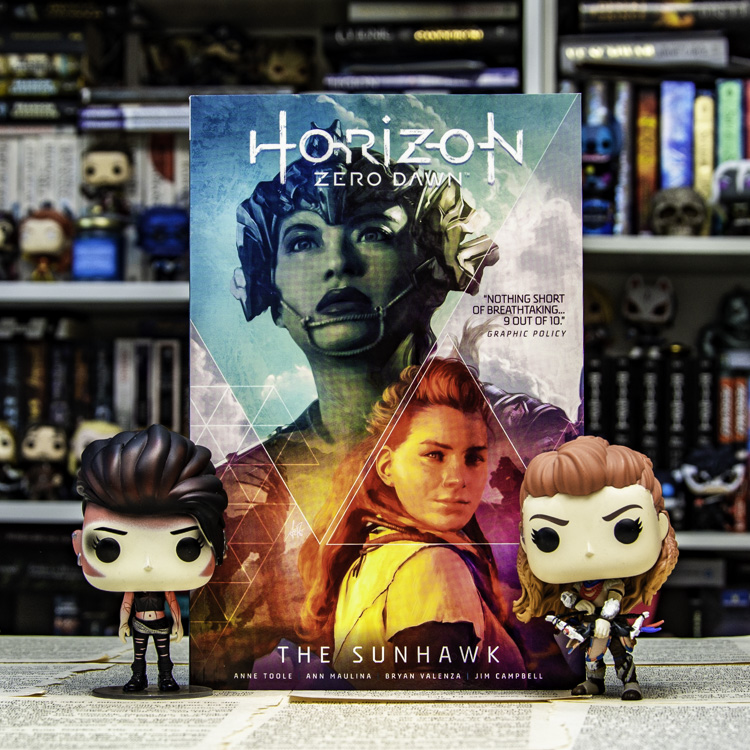 Today I come to you with something different – a comic review. I usually only write reviews for books, but when I saw that Titan Comics was looking for reviewers for the Horizon Zero Down comics, I couldn’t resist. I’m a massive fan of this series, and it’s one of my favourite games, so picking up those comics was an obvious choice.

Horizon Zero Dawn is an action role-playing game developed by Guerrilla Games and published in 2017. Its sequel, Horizon Forbidden West, came out in February this year. The setting is a post-apocalyptic world, where dangerous animal-like machines rule the lands while the last remnants of human tribes struggle to survive. Aloy, the protagonist, is a skilled machine hunter who, unlike most of her peers, embraces the unknown, lost technology. She sets off on a journey to discover what caused the apocalypse and the fall of humankind. The first comic in the series, The Sunhawk, takes place after the first game’s ending, so it’s best to read it after you finish the game (because of spoilers). Aloy is a supporting character, while her friend and ally Talanah takes the lead. After becoming the Sunhawk – the leader of Hunter’s Lodge, and restoring honour to the memory of her late father and brother, she still feels restless. She can’t stay in Meridian doing just administrating tasks. She takes up a contract for a Clawstrider manacing a remote village far from Meridian. The trail leads her to a new kind of very dangerous machine. Luckily, she meets a mysterious stranger who can help her take the creature down.

The comics series is the fruit of the cooperation between Guerrilla Studio and Titan Comics. The writer, Anne Toole, is the same person that wrote the questline for Talanah in the game. It gives the story more authenticity because it’s still a canon story. I love that the creators didn’t go for retelling the same tale in a different medium but chose to expand the universe and tell those little stories that we heard about but never got specific details. And I’m glad they decided on Talanah for the first issue because she was one of the most remarkable characters.

In the first volume, we learn what happens to Talanah between the end of the first game and Forbidden West. When we meet the huntress in the sequel, she’s already on her quest, and throughout the game, we slowly get more details about why she’s searching for her friend. The Sunhawk shows us exactly how the whole story started.

The art by Ann Maulina is stunning, and I think every fan of the Horizon series will appreciate such an excellent addition to their collection. At the back of the book is a cover gallery with even more beautiful art by different artists, including Peach Momoko (Marvel artist).

Horizon Zero Down comics series is a must for the game’s fans. Suppose you ever miss the beautiful, post-apocalyptic world after another playthrough. You can always take up comics and feast your eyes with even more beautiful art of brave hunters and deadly machines!

You can find the comics here: