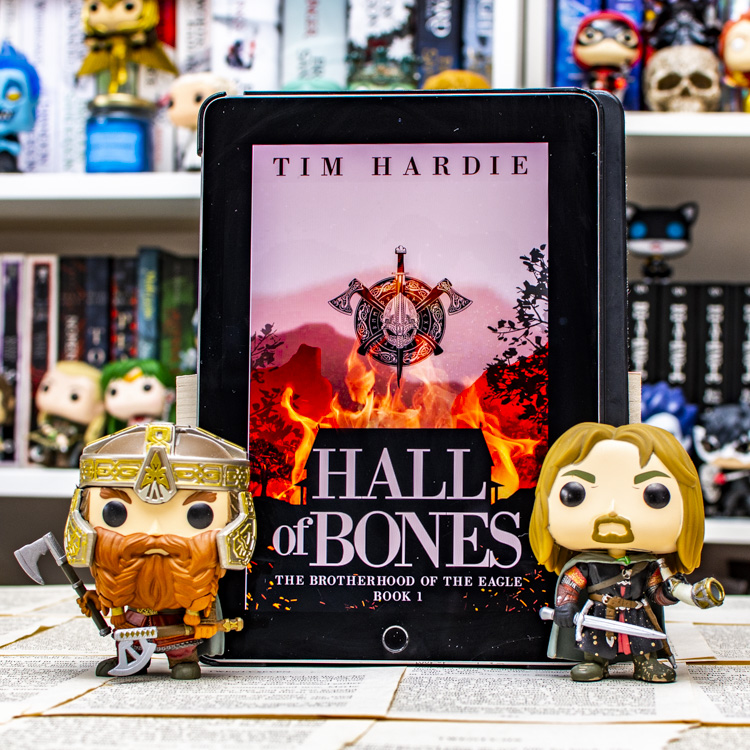 “Hall of Bones” by Tim Hardie is a debut epic fantasy novel and the first book in the series “The Brotherhood of the Eagle”. I received a copy of the text from the author in exchange for an honest review. I have to say I was a bit weary, as, with debut books, it’s often hit-or-miss. But I liked the synopsis and felt like reading some epic fantasy in a Viking setting, so I gave it a shot. And I have to say I was positively surprised. If I didn’t know any better, I would never guess it was the author’s first novel.

We learn the story from the protagonist’s point of view. In the first scene, we discover that Rothgar is imprisoned for some despicable crimes and awaits his death. After that, he proceeds to tell us his tale, starting from childhood. The setting is the remote land of Laskar, where seven ruling Viking clans are fighting for power and influence. But when one of the families get all too strong and threatens to take over the whole land, the clan chiefs had to unite if they hope for any chance of survival.

The book is strong in the politic field. The first half of the story revolves around forming alliances, plotting how to sway the former enemies to the right cause and who can be trusted as a partner and who had to be eliminated. From the very start, there are many characters from all different factions, and it takes a moment to catch up who is who. Fortunately, at the end of the book, we have an appendix with all essential personas listed, and their role explained. The author is particularly good at building tension. Even though there’s not much direct endangerment happening from the start, we can constantly feel that something is hanging in the air and is about to explode sooner or later.

The second half of the book is quite different; because of the unfolded events, Rothgar’s life is forever changed, and he had to learn to live differently. But here, we learn about the magical aspects of the story for the first time. Slowly we discover more about supernatural forces that run rampant over the lands of Laskar, even though everyone thought they disappeared a long time ago together with the gods.

I feel that “The Hall of Bones” is only a prelude to the truly epic story. It’s like the book got to the most exciting point, and it was already over. In the last chapters, you will discover where the book’s title and the series’ name came from, a neat finish for this part of the story. Sometimes the tale dragged a bit, and I was a little bored by all the complex political intrigues, but it may be because my primary reading time is right before sleeping, so my brain is ready to snooze away.

If you enjoy the stories like “Game of Thrones”, where there are many careful political intrigues, you will undoubtedly enjoy this book. Of course, because it’s all about the Vikings, you will also find here lots of bloody battles, fierce warriors, and raids on poor and defenceless villages. The theme itself is also very well done. The names of characters and places, the customs, the way they talk – it all makes it easy to immerse completely into the world of the story.

“Hall of Bones” is a strong debut, and I’ll be waiting for the sequel because I expect it will only get better and even more enjoyable.