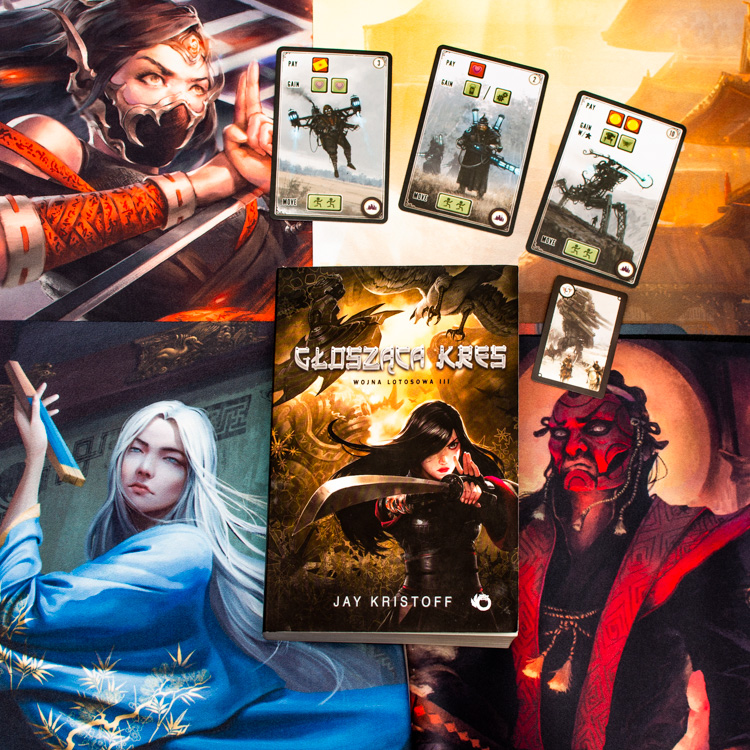 Endsinger by Jay Kristoff is the last book in The Lotus Wars series. The Shima Imperium is torn by civil war. After a failed attempt of prolonging the Kazumitsu dynasty Lotus Guild is determined to use their one last asset, the terrible machine called the Earthcrusher to bend other clans to their will and get rid of rebellion once and for all. In the meantime Yukiko and Buruu have to work very hard to keep Kage united to face the upcoming Guild attack. But soon another player will join the conflict, one no one have foreseen.

This book was just so epic. Jay Kristoff is great in creating moving, monumental tales, full of action, unexpected twists and betrayals. I fell in love completely with that story. I’ve heard some opinions, that people wasn’t really thrilled with this, or couldn’t get into it enough to enjoy it. I think it depends mostly on reader and if you like the author style. I discovered I love it, and I can buy all his books without question asked.

When it comes to Endsinger it is quite a big book. But with the upcoming conflict and rebellion taking their last stand there is no time for boredom. The last epic battle is starting halfway through book and, wow, it goes on an on bringing us more and more despair, tears and breaking our poor hearts time after time, with just the smallest glimmer of hope. And Jay Kristoff can be really cruel when it comes to your favourite characters, so be prepared to steel your hearts.

I really like the whole series, and the main idea behind it. I think it will stay with me for a long time, because I come to love Buruu and Yukiko. Even though the ending broke my heart I think it was perfect for this story. And it’s not only a tale of a girl and her thunder tiger. It touches so many aspect of life: people’s greed, strive for power, friendship, loyalty, honour and hope that after all the sun will rise again.

I know, that not all Japanese culture aspects were portraited correctly and it bothered some people. It could probably be done better, with more thorough research, but to be honest I wasn’t bother by this at all, I was occupied by the story completely.

If you like epic fantasy stories, with dystopian vibes, you have to read this series. It’s not the easiest book to read, it’s not very quick to get into, but it is so worth to stick to it, to see what crazy ideas author has prepared for you.