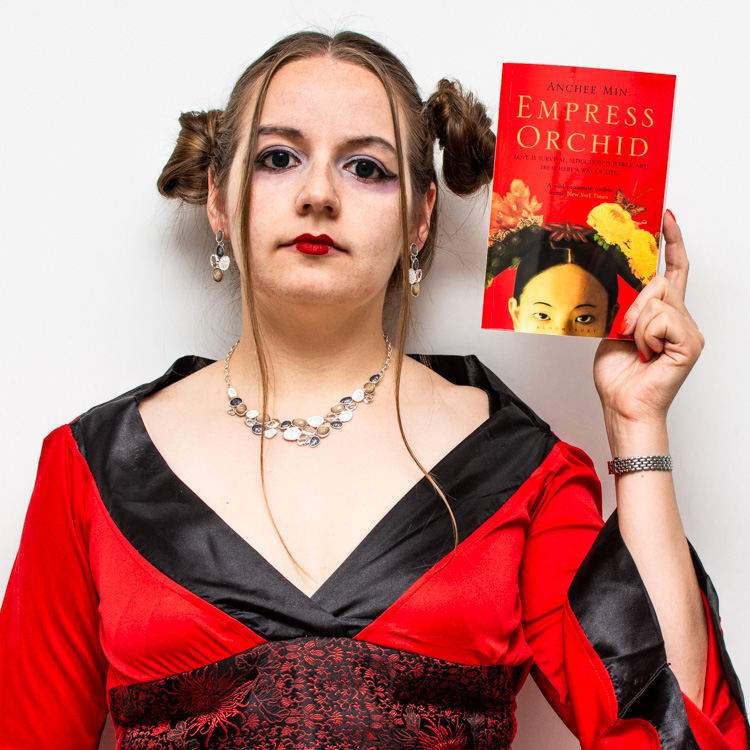 Empress Orchid is a history-based novel written by Anchee Min. We learn about the life of Empress Dowager Cixi, her early life and how she came into the power in the Chinese government. It is an exciting story, considering the complicated political situation the country was after the Opium Wars. Young Orchid is desperate to escape an arranged marriage with her opium-addicted cousin volunteer to herself as a candidate for an imperial concubine. What seemed to be a long shot surprisingly pays out. She is not only approved as a worthy contender but also manage to catch the attention of the Emperor and ends up appointed one of the seven official imperial wives.

It seems like an easy life, living in a luxury palace full of beautiful artwork and lavish gardens, with only one purpose, bearing the Emperor’s child. But it quickly turns out it’s tough. Orchid was just one of the hundreds of concubines who were living in Forbidden City only to serve their master if he called. But very often he didn’t call at all. Young Lady Yehonala wasn’t allowed to leave Forbidden City, she couldn’t visit her family, and they couldn’t come to her either. It was an incredibly lonely and tiresome existence. She was surrounded by eunuchs and maids attending to her every need, even the most private ones. She wasn’t allowed to do anything herself (like bathing, dressing up, etc.), because imperial wives were not supposed to do any work by themselves.

Young Orchid thought she would be content just to sit and wait for the sign from the Emperor, but she finds herself desperate for his attention very quickly. And Forbidden City is ruled by rigorous customs and rigid rules, where every disobedience is punished mercilessly. But our character is ready to risk it all to get her chance to meet and seduce Emperor to fulfil her duty as his wife. But when she finally succeeds and manage to become Emperor’s favourite, her troubles has only begun. Now all the other concubines want to get rid of her and treachery is lurking in every corner.

The book shows us beautify the main character’s struggles. Orchid is very intelligent and full of passion. She loves her country and wants to help her husband as much as she can. And even though the role of women in conservative Chinese society was to sit back and don’t bother with politics, she’s not afraid of sharing her opinion and advise when asked. She faced so many challenges during her life; it’s a miracle she wasn’t sentenced to death on the way. Though she was close many times.

In Empress Orchid we learn a lot about XIX century China, their customs, fashion and people’s lives. It’s like the author is taking us for a wild trip in time and space to this lavishing ancient civilisation so exotic for us, Europeans. So many of the customs seem utterly ridiculous to us, and yet they were something normal to Chinese people. Their love for art and beautiful things were amazing, and we can only imagine the treasures they collected since the beginning of time. And yet they had this horrible injustice, where nobility live with unbelievable riches, while half of the country was dying from starvation.

I also liked how the author showed us the struggle the nobility had with accepting that the barbarians, as the called Europeans, were surpassing they with technological progress and were able to dictate the terms of treaties. For people, who always believed that their Emperor is the Son of Heavens and his word is a law, it was quite a surprise to find him powerless while facing the fast-changing outside world.

Empress Orchid is not an easy book to read. It is very rich in descriptions, but for me it was mesmerising. There is also quite a lot about Chinese history from that period, Opium Wars, and political struggles with other countries. Some people may find it monotone and annoying, but my curiosity was picked, and I ended up searching the Internet to find out more about this period.

If you like history-based novels with strong female characters, with lots of political scheming, you’ll love this book. And if you are fascinated by Chinese culture and want to learn more about it, this book is a good start.