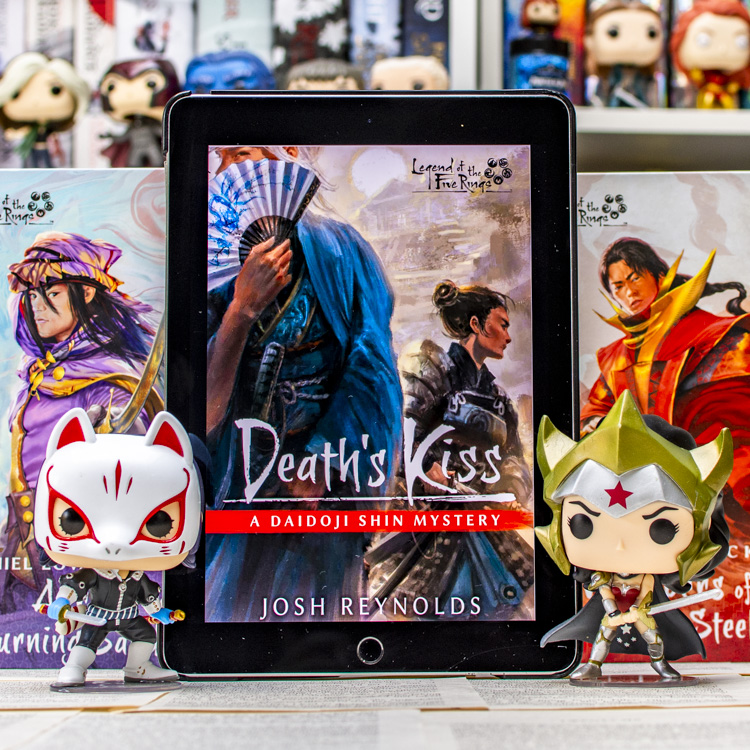 “Death’s Kiss” by Joshua Reynolds is the second book in “A Daidoji Shin Mystery” series based in the world from “Legend of the Five Rings”. I enjoyed the first novel in the series and was waiting eagerly to meet with a witty Crane again.

The story starts a few months after the conclusion of the investigation from “Poison River”. Shin is busy rebuilding the Foxfire Theatre, but deep down, he is already bored with his newest undertaking. When a friend from the Unicorn Clan asks him for a favour, he is more than happy to travel into a distant city of Hisatu-Kesu to investigate a murder case. What seems like an obvious, resolved incident turns out to be anything but.

The most vital point of the whole story is the protagonist and his witty conversations. We learn about the entire incident through Shin’s discussions with different witnesses and officials. These are always a pure joy to read – light, entertaining and spot-on. In this book, besides Kasami, whose long-suffering attitude is a perfect counterweight for expressive Shin, we also have a new character - Batu. He is a magistrate of the Hisatu-Kesu and is forced to work closely with Shin. Both men have a history of complicated and challenging friendship, and they didn’t part ways on good terms. Batu is initially very guarded and cautious around Shin, and his attitude is even more irritable than Kasami’s.

The murder mystery itself is not overly complicated. It involves many political intrigues, yes, but I missed a bit of mystery and surprise. It was easy to guess the foremost perpetrator half through the book, and there wasn’t a single ‘wow’ or ‘aha’ moment that would invoke any stronger emotions. There is one development in the story that would probably impact the following books hugely because to solve the case, Shin must entangle himself with people, whom he would rather not owe favours to.

I enjoyed the book mainly because it’s light and entertaining, and I love samurai-based settings. If you are looking for something easy to read without an overcomplex storyline and appreciate Japanese based fantasy, you should give it a shot.