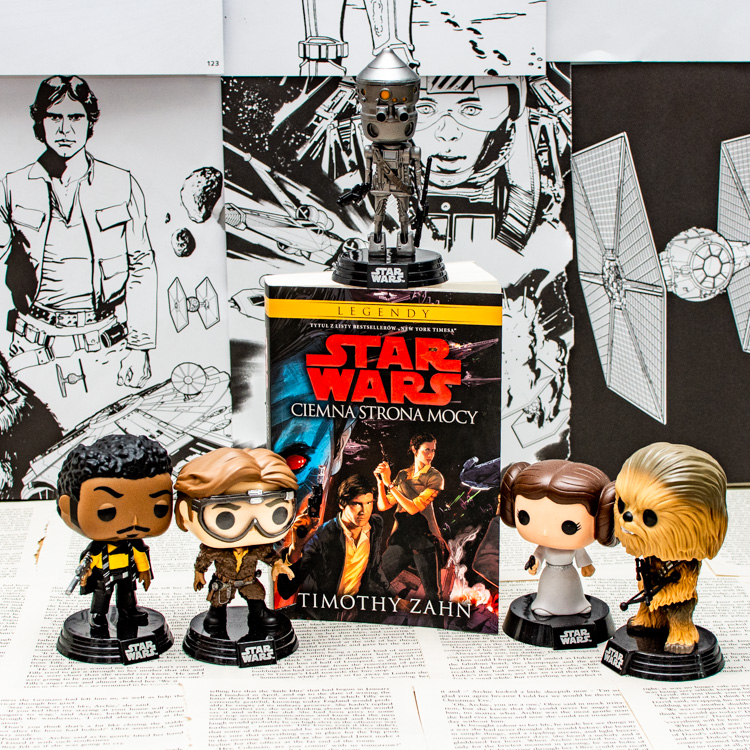 Dark Force Rising by Timothy Zahn is the second book in Star Wars: The Thrawn Trilogy. After reading the first book I couldn’t wait to read this one and see what Grand Admiral will scheme this time. And I was not disappointed!

As Heir to Empire started slow and a little bit boring, here we have action from the very start. Our heroes don’t waste any time and after a quick catch up they move yet again - Han and Lando to find out who is the traitor in the midst of the Republic, Leia to negotiate peace terms with loyal to the Empire Noghri race while Luke is going to seek a mysterious Jedi Master. Not one of this tasks is easy though and Thrawn is doing everything to make a Republic Council life very difficult creating chaos and destruction. And on the way it turns out that the legends of an enormous missing dreadnaught fleet are true and the race to find it between the Empire and the Republic is on.

This series is very movie like. The characters are true to what we know from original Star Wars story and their adventures - the very nearly missed traps and miraculous escapes have very familiar feeling. I love what Zahn did with the story continuation. Even though the Empire was defeated and is just a shadow of its former glory it is still a threat to the Republic because of one, extremely talented individual - Grand Admiral Thrawn. So our heroes still have their hands full of hard work and challenges.

What I also liked is the political scheming. There was more of it in this book and it was showing very accurately how hard it is to be a politician in the democratic institution. Even though the Empire is still a threat, some politicians from the Council are more concerned by their own interest and position, while the others hold on to their grudges and hurt prides and refuse to help. I just loved one of the last scenes in the book, where the Republic people were bickering like spoiled children while the Empire showed their full might with flawless tactical approach.

I haven’t read much of Star Wars books, just couple of them, but The Thrawn series is my absolute favourite right now. It feels great that thanks to writers we can come back again and again to this amazing universe and read about more stories that happened (or not, after Disney takeover ;)) there. If you are fan of Star Wars and you were to choose just one series from this universe to read, pick this one!