Curse of Honor - A Legend of the Five Rings Novel 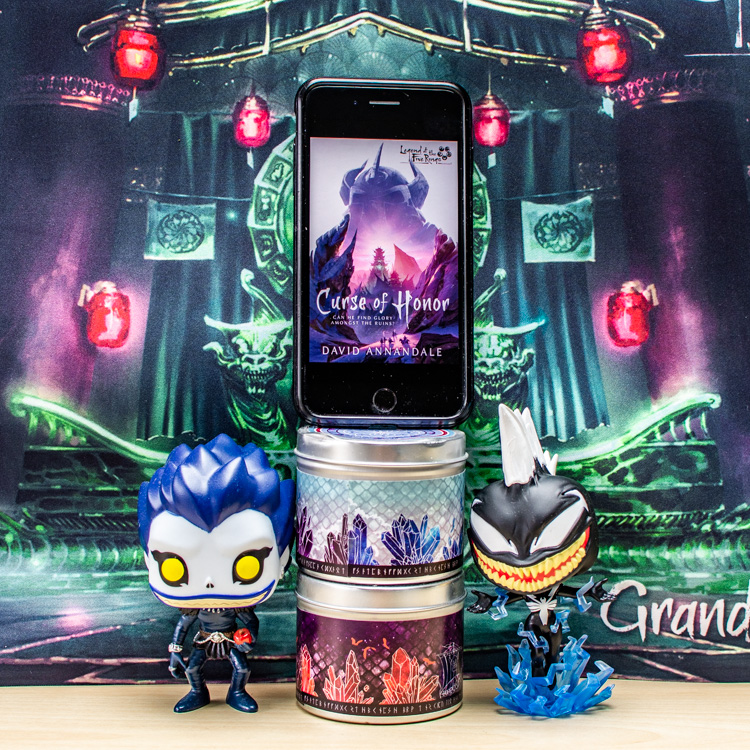 “Curse of Honor - A Legend of the Five Rings Novel” by David Annandale is the first full-size novel placed in the fantastic world of Rokugan, created by Fantasy Flight Games. I wanted to read this book because I’m familiar with the card game (which I play quite often with my husband) and I love this world and its elaborate lore. I have to note I am not a hardcore fan – I haven’t read all released novellas and don’t follow on significant world events that are happening in Rokugan. But even if you don’t know this fandom rest assured – you are not required to have any previous knowledge to enjoy reading this book.

Let me tell you a little bit about the book setting. Rokugan is a fantastic land based on feudal Japan with influences of other East Asian countries. We have here different Clans that are competing against each other to win the favour of Emperor and more control, using samurais, court intrigues, spies, and assassins. Just like in real Eastern cultures, honour plays a tremendously important role in shaping a society where disgrace can be fatal. There is also magic here - Shugenjas commanded the power of five elements. And though they are infrequent, they made extremely powerful addition for their Clans. Aside there is a dark land called the Shadowlands – a wasteland where the demons and other unthinkable monstrosities roam free spreading corruption wherever they go. And that’s where the author takes us in his book.

Striking Dawn Castle is placed at the borders of Rokugan, in the mountains where Crab Clan defends the rest of the world from the foul creatures of Shadowlands. Hida Haru is a sole heir to the daimyo of Striking Dawn, but unfortunately so far, he is one big disappointment. It is not easy to prove your worth in society driven by honour, especially in the Crab Clan, where so many samurais are walking legends because of the constant war with the Shadowlands. Haru is tormented by ill thoughts, while sent on another meaningless escort mission. But the incredible social pressure and unfavourable fate are not making things easy for him. Once again, he found himself in a situation, where all outcomes seemed to be horrible. Surprisingly amidst all the chaos and disaster, Haru discovers something that could change his miserable life and bring glory to his family. Not thinking twice, he let himself pursue the dangerous findings. As it turns out, it is only begging of grave misfortune.

I had mixed feelings while I was reading the first part of this book. It is very well written; the author describes everything in great details, and it is easy to imagine and immerse into the world completely. But the chapters where we follow Haru are a bit depressing. All his thoughts are gloomy, and he was always daydreaming about what could have been. But when the action moves to Striking Dawn castle… my, oh my – how everything changes. We meet more characters – Captain Ochiba and Lieutenant Barako who are picture perfect Crab Clan representatives. We also get familiarised with the political situation in a fortress – two competing families. One of them is ruling, but even the slightest mistake may lead to a shift of power. And amid it the Shadowland threat materialised, threatening to consume and corrupt everything it touches.

The story is full of tension which is building slowly but surely. You can see right away that the author is a fan of horror stories. I think he pictured very accurately how the unknown evil presence would feel. Everyone in the castle can feel the danger, the dark energy looming in the darkness in their home, but they can’t pinpoint it until it is too late. This kind of writing will keep you at the edge of your seat for a long time until you finish the book, and all mysteries are reviled.

I liked how David Annandale pictured corruption of the Shadowlands. It was not only a regular walking dead and mysterious dark energy kind of thing. He gave us the evil that is cunning, twisted and manipulative. That play on people’s emotion and cause more harm by sowing doubts and distrust than actually slaughtering innocents. Although there are some very brutal encounters too, and they will give you goosebumps, believe me.

I think all Legend of the Five Rings’ fans will appreciate the story author created. The world shown by him is intriguing and very believable. The characters are similar to what I imagined Crab Clans members to be. Firstly, they are warriors, and they find great pride in defending Rokugan from the evil of the Shadowlands. And even though they are stationed at the end of the world, the political intrigues are still present here, although not as sophisticated as they might be in other parts of the empire.

Once again, even if you are not familiar with Legend of the Five Rings fandom, you can still enjoy this book. The setting based on feudal Japan is very captivating, and the novel is keeping suspense for the longest time. If you enjoy dark stories full of a constant fight against evil, you can add “Curse of Honor” to your reading list!