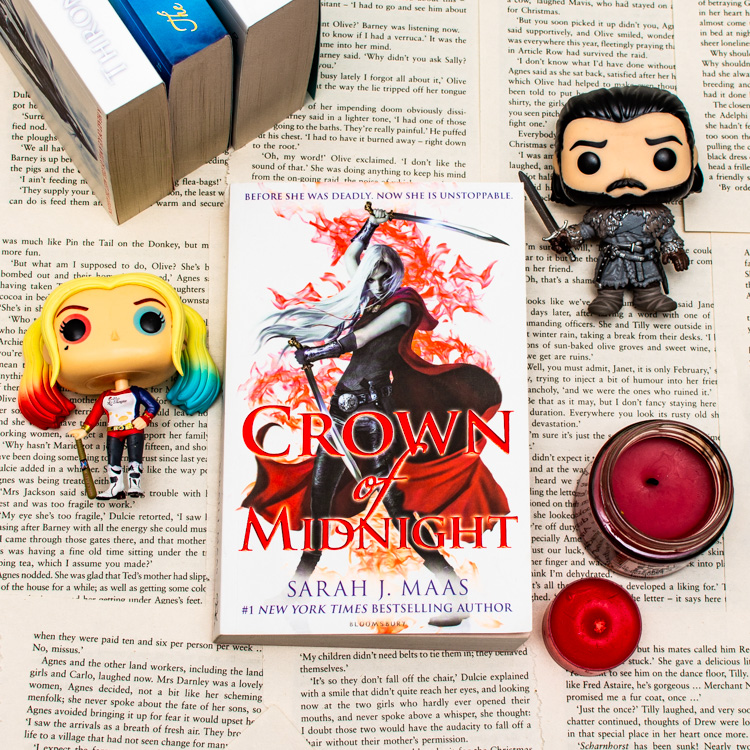 Crown of Midnight is the second book in Throne of Glass series. As it turns out, the first book was merely a prelude to what’s happening in this one. I didn’t know what to expect from this book. All my friends were telling me it is so much better then first one, which for me was ok. So I finally decided to get back to this series to see where it will take me. And I have to agree it is so much more.

The first book was pretty simple plotwise. There were competition held and it was obvious that Celaena will somehow win it, not much surprises there. But with the sequel the story is completely different. After being appointed King’s Champion Celaena is walking a very thin and dangerous line posing as faithful servant while she helps her targets to escape to safety and fakes their death. She’s smart enough to not share her true intentions with anyone, not even her closes friends. But King’s demands are becoming more and more difficult and soon the assassin has to face some very tough choices to keep her appearances.

I really like the whole scenery Sarah J. Maas was painting in this book. Ancient mysteries to be uncovered, strange riddles and more and more magic peaking through even though the whole magic was supposed to be extinguished from this world. I absolutely adore how the author use the royal library as a place full of secrets, forgotten passageways and pretty horrible enigma lurking beneath the palace. Who wouldn’t like to venture into that place?

The book has definitely more epic, high fantasy vibes too. We learn about a threat that is endangering not only Celaena’s world, but also the worlds beyond it. Our protagonist is of course fighting hard against being the chosen one to stop the evil king, but soon she realises she doesn’t have much choice and if she won’t act, then no one will.

The characters are also better developed in this book. Dorian who, for me, in the Throne of Glass was just a pretty prince, here gains many more dimensions. He’s not only occupied with his longing for Celaena, but he starts to see what his father’s rule is doing for the country which he would be a king one day. He also has his own dark secret which he desperately tries to hide and resolved on his own.

I also loved the romance between Celaena and Chaol. Guard Capitan was my favourite character after first book and I was so glad they eventually surrender to their feelings. Although I knew that this won’t last, not only because of who they are and where their loyalties lays, but this series is so popular you can’t go to Instagram not seeing a spoilers. So yes, I’ve seen loads of fan arts and knew this romance would probably won’t last too long. But still I enjoyed it and think it was a perfect pairing for this book.

As I said, the big revelation at the end wasn’t any surprise to me, as I was already aware of it. It’s kind of shame, because maybe if I didn’t have so many spoilers I would give this book five stars. And as it is it gets solid four. I think I won’t take long to take up Heir of Fire. I’m really curious what will happen next and where the story will take us this time. So excited to meet actual Fae who left hidden in this world.