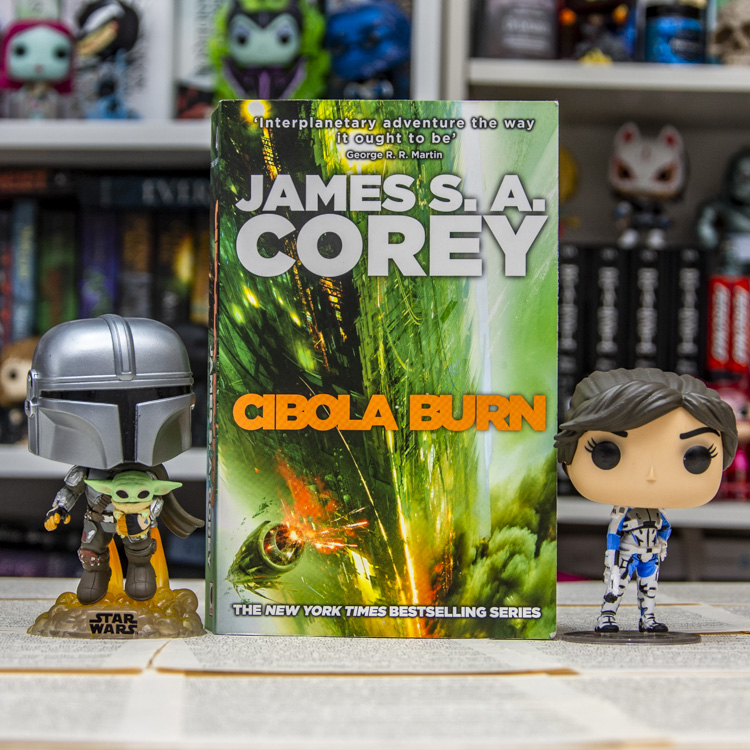 “Cibola Burn” is the fourth book in the explosive space opera series “The Expanse”. As soon as the intergalactic gate has been open, adventurous settlers move on to brave the unknown and colonise promising new planets. One of such planets is Ilus (or New Terra, depending on who you ask). The Belter’s ship managed to reach it first, and they started building their settlement right away. Even if the planet is similar to Earth, it is still a strange place, and living there is complicated. Things start looking up when the Belters discover a rich deposit of valuable ore. If they sell it, they can buy everything they need for their colony to thrive. But before they manage to ship their cargo, the UN’s corporation arrives holding an official claim to the planet and all its resources. The tensions are skyrocketing, threatening to break a fragile peace between Earth and OPA. Who is going to defuse this conflict? Why, James Holden, of course!

I had a great time reading this book. The description of New Terra and its bizarre ecosystem were captivating, and you could feel the struggle of the colonist. Also, the conflict between two fractions was building from the start of the book, making the fight for survival even more enjoyable.

Also, very soon, it turns out that a fancy new planet is not as friendly as everyone thought. At one point, everything goes to hell, and both Belters and corporate people are forced to work together to survive. And even then, they find ways to antagonise each other, while poor Holden tries his best to save everyone.

There is also a puzzling protomolecule creators’ mystery to solve. While Holden tries to stop everyone from killing each other, he’s also cooperating with ghostly Miller to uncover the ancient alien technology, that in the end, might help to save everyone. Or possibly destroy everything. You never know with those alien artefacts.

I enjoyed this book much more than “Abaddon’s Gate”. The characters’ points of view were more engaging and the setting more captivating. Also, the Crew of the Rocinante played a more significant role here, and it’s always a pleasure to read about them.