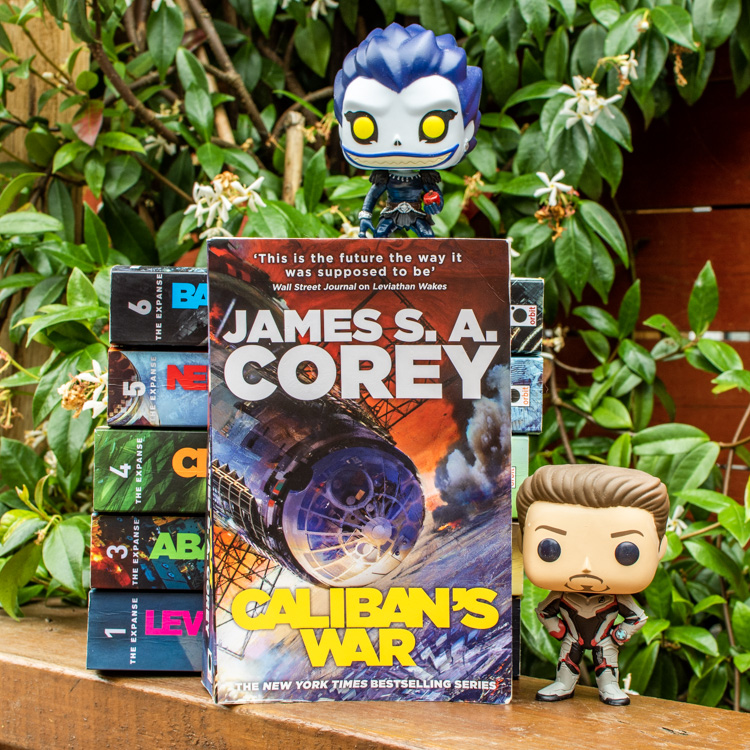 “Caliban’s War “is the second book in “The Expanse” series by James S. A. Corey. The story continues with well known high pace and high stakes action. We start at Ganymede, were a Martian soldier is faced with a monstrous creature, who slaughter the whole platoon of soldiers in seconds. The even triggers long-held hostilities between Mars and Earth, and as a result, the neutral Ganymede suffers from disastrous collateral damage. And amid chaos and panic, a child is taken away from a loving parent.

Holden and the crew of Rocinante are obviously in the middle of everything. While working for Outer Planet Alliance, they arrive at Ganymede to find the whole planet struggling to survive. They also agree to help local scientist, Prax, look for his missing daughter. The simple case quickly turns out to be part of the bigger, interplanetary plot connected to recent, dangerous events. In the meantime, an Earth political figure, Avasarala, is trying her best to neutralize conflict between Mars and Earth, while trying to find out what exactly is happening on Venus, where protomolecule landed.

In the second book, we have a bunch of new characters, and we learn the story from their point of view too. I liked all of them. Avasarala, highly intelligent and powerful older woman, who curses like a sailor, but ultimately fights for a better future for everyone. Bobby, the only surviving marine who finds herself lost in a situation far above her understanding. Prax, a scientist and desperate father who is prepared to do anything to get back his daughter. Together with the crew of Rocinante, they made a remarkably exciting and explosive mixture of characters.

There is no place for boredom in “Caliban’s War”. The interplanetary conflict is escalating with every passing hour, governments are plotting secretly how to get the advantage over opponents, while on Venus something is happening, but no one can even describe what exactly is it. The story is engaging, dialogues full of black humour and global events are escalating.

I’ve already watched the TV series, but the book is so much more. I feel like in the adaptation, everything was just touched up, and we got the main events to watch. But in “Caliban’s War” there are so many details that you can fully immerse in this future world. The description of how life on Ganymede looked like before the war, and how everything collapsed in a short time was fantastic. I enjoyed all the specifications in Prax’s chapters. Some of those have a lot of science behind them, but they were well written, so it was easy to understand and imagine everything.

I know I only read the second book, but I feel that “The Expanse” series is one of the best sci-fi I read. I always enjoy getting back to this world and considering that there are already eight books published and the ninth is being written, it brings a promise of so much more - more excitement, more epic battles and more of a strange and alien world. If you are fans of sci-fi, this series is a must-read.