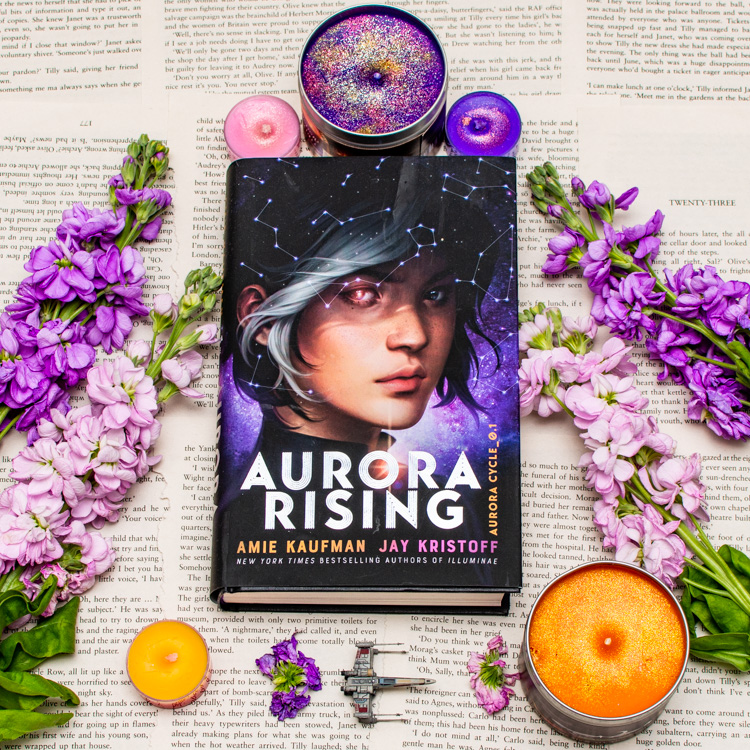 I was waiting for Aurora Rising since I’ve finished Illuminae Files series and heard about new book from the same authors duo. So, I was beyond happy when the book was finally released, and I got my hands on it. I think it was one of my most anticipated novels this year. Was it worth all the hype?

The year is 2380 and Tyler Jones is graduating prestigious Aurora Academy. His prospects are very bright, he’s on top of all his classes and has first three picks on the Draft, so he can choose only the best people for his squad. But the night before ceremony he feels restless and goes out for a quick flight to calm his nerves. To his surprise, he receives a distress signal from derelict ship caught in a Fold storm. He bravely rescues the only survivor, and almost dies in the process. Fortunately they both make it back to Aurora Academy, but Tyler misses the Draft and ends up with a squad of misfits, psychopaths and losers nobody else wanted. And it turns out the girl he just saved has been drifting in space for over two hundred years. To say that she feels a bit lost is an understatement.

This book feels like a good, Hollywood movie. The characters are great. They are all good looking, charming, sassy and incredibly talented, but it didn’t bother me much, because they also have their own stories, insecurities and weirdo stigmas. At first, they seem to by totally different and unable to cooperate with anyone, but as soon as the situation becomes dangerous, they find a way to put their talents to good use. Even though there is a long way for them to be working together efficiently. The banter is sometimes hilarious, I was often smiling like crazy reading this book.

Aurora Rising is different then Illuminae Files. It has less twists and turns and the plot is more predictable. But that is not necessary a bad thing. Even though it didn’t surprise me, it has everything, what I like in this kind of book. There are loads of alien races (including crazy handsome space elves with anger management issues), space battles, big, intergalactic conspiracy, telekinetic powers and even huge, fat, cosmic dinosaur! I think authors know exactly what their audience would like to see in the story, and they delivered exactly that. There is also drama, and nonstop action.

I liked all the characters. Aurora, the girl out of time, is completely lost at the beginning, but when she realized someone is trying to hide the truth about the colony she was supposed to go in her time, she becomes determined to unmask the conspiracy. Even tough she starts to have some strange visions and powers, she can’t control.

I think the best word to describe this book is epic. The story, adventures, a big threat to the whole galaxy which only our weird squad of misfits can stop. I would love to see that book made into movie, or TV series, because it would be awesome. If you like some easy to read sci-fi with memorable, sassy characters and loads of action, you can’t go wrong with this book. Jay Kristoff and Amie Kaufman once again showed us, that authors cooperation can give amazing results. I was not disappointed with Aurora Rising and totally loved it, can’t wait for continuation.