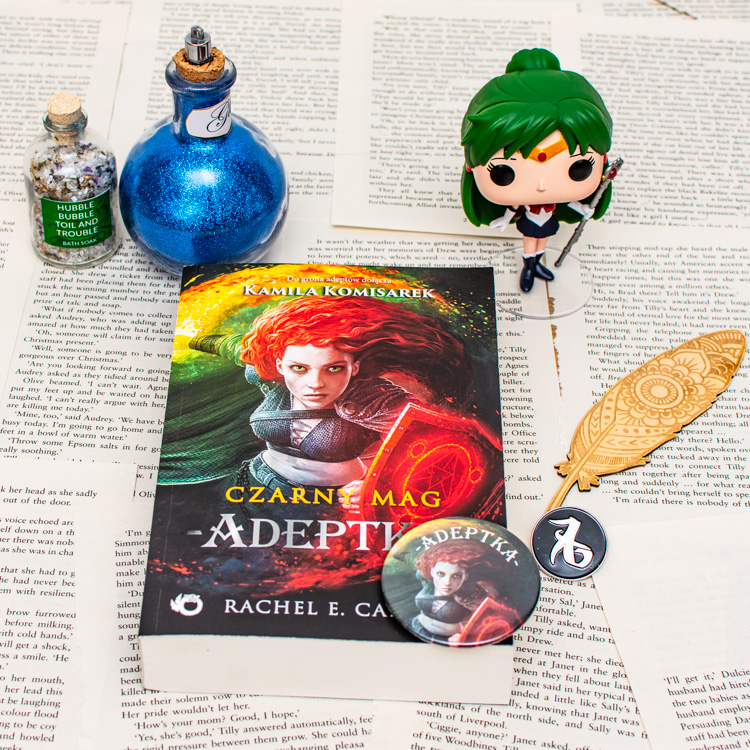 Apprentice is the second book in The Black Mage series by Rachel E. Carter. I was very curious about this book and how the story of Ryiah and her friends will unfold. As I expected we get to see more of Jerar, events keep moving from one place to another so we can learn more about this magical world. There is also more action, our heroes have to face not only pretend dangers of lessons and exercises, but also some actual battles where they stand hand in hand with regular army. We also have more romance in this book as relations between protagonists deepens with time. Unlike the first book Apprentice is covering whole four years of Ryiah’s apprenticeship.

Th sequel is read as easily as the First Year. Magical internship involves more practical exercises and more challenges for our characters. Combat mages are focused on training they fighting skills and spells against each other and in changing environment, while Healers are patching them up after each training session. All the apprentices are also involved with manoeuvres with regular army, to prepare them for they actual work after finishing academy. And sometimes, when they are invited to the capital city, they are provided with luxury comforts because of their new social status.

Ryiah is a bit more mature in this book. Because she was accepted as an apprentice she is no longer a peasant (at least in the eyes of most of society). She is more confident and she know her magic is really strong, so she is not as easily bullied as in first year. But school rivalry still lives, Pricilla is still her arch enemy. The enmity is even deeper because fascination between Ry and prince Darren is more intense in this book.

What I didn’t like much in this tome is a love triangle that author serves us. It wouldn’t be that bad, if not the fact, that after first book it was quite obvious that against all the reason and social norms Ryiah and prince Darren are very strongly connected. So we have another Ry’s admirer pushed between them. And of course it had to be a ‘good boy’. He is kind, funny, good hearted and loves her deeply. You don’t need much knowledge to predict how this will end. Of course a ‘good boy’ will end up with a broken heart. Fortunately the triangle fall apart pretty quickly and the author ended the book in a way that I expect less romantic melodrama and more real dangers in the next book.

Still we don’t know much about politics and actual situation between Jerar and his neighbours. We know that one of them is keep sending small raids on the boarders of the kingdom, but not too much to make them reconsider a peace treaty. When Ryiah and Darren are assign to a secret spy mission I was expecting some big twist or revelation, but we got none of that. It is just said that this mission is crucial for the kingdom and they should obey like a good soldiers with no questions asked. And then it’s never mention again.

Apprentice is a good continuation for the series. The ending is again leaving us with a thought that there is much more to come in next two books. There is threat of war looming on the horizon and promise of more action and warfare. In my opinion the book would do well without love triangle, but it was not too much to bear. So I will read the next book for sure to see how Ryiah’s story continue.