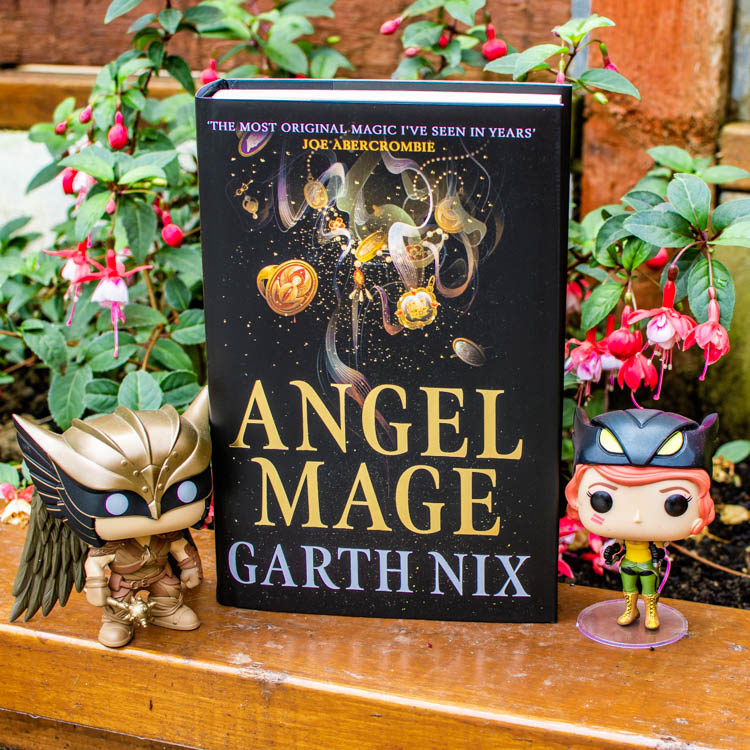 ‘Angel Mage’ is the newest fantasy novel by Garth Nix. It’s a stand-alone with a very original magic system based on summoning angels and using their powers. I was hooked from the very first pages.

Liliath was a very talented icon maker with extraordinary powers, but with a fall of her state and its archangel disappearance, she was forced to flee and run for her life. She goes into a magically induced sleep to wait for a convenient time to get back and restore the fallen angel to its glorious power. And make their enemies pay.

Four young people who have never met before feeling a strange connection that draws them together. Simeon is a doctor, Henri a clerk, Agnez a fierce musketeer cadet while Dorota has a gift of swift icon making. They all end up caught in the intrigue they don’t understand but can’t avoid.

The world the author created is fantastic. I was mesmerised from the start. Magic people use is basically summoning an angel and ordering him to use his gifts to do their bidding. There are many angels, and all of them have different scopes of powers. There is also an angelic hierarchy, while Seraphim could only perform a simple task, archangel has a power beyond anything you thought possible. But as always, it comes with a great cost. Each summoning takes some time of user lifespan and the more powerful angel the greatest the price is. Everything is described with great details. When the angel is summoned, people can hear trumpets, or harps or distant wings flapping.

The other very exciting thing is that the world created by the author is ruled by women mostly. All highest positions are filled by women. The bishops, the generals in all military orders, the queen. There is a king, but he is just a useless figurehead who only makes troubles. I was wondering if there was any specific reason behind it, but it seems it wasn’t. It was very refreshing, cause in most books the majority posts are usually in the hands of man, with just a few exceptions. It was something I would expect from a female author, so it was even more surprising.

I also like the power struggles. There were different factions, each with its own military arm, all competing, but still cooperating enough to keep their state in order. We also have here the lowest cast of outcasts, descendants of fallen Ystara. They are given the most gruelling jobs and are perceived as rodents, basically. They all wear grey, so everyone can see they are Refusers. They can’t receive any angelic magic, because they either turned do ash, or change into a hideous wild beast.

I’m still in awe of what the author created. There is so much to discover there that I really hope that we will see other books set in this world. There are even the musketeers order here. And they are daring, reckless and brave, as you can imagine. Funnily enough, their commander is named Dartagnan. And it’s a she of course. There are quite a few such funny puns throughout a book, and they always made me smile.

The story itself was exciting and got great potential. Although I fell, the ending was a bit too rushed. I would gladly see this tale made into a series, with more complex plots and intrigues. But it is the book you must read if you like fantasy tales. It will leave you wanting more.